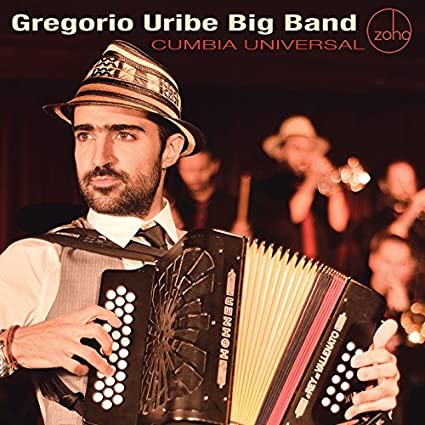 Liner Notes
It’s Thursday night. The sun is down, and a star is out. A line forms outside Zinc Bar in Greenwich Village. They come to see the man in the hat: wearing his trademark sombrero vueltiao’, Gregorio Uribe takes the stage with aplomb. The Gregorio Uribe Big Band begins with a burst of tropical rhythms and ends with a fury of jazz harmonies and whistle-to-yourself-melodies. Indeed, the secret is out: Gregorio is the most exciting Latin musician to hit the scene in years.

Hailing from Bogotá and educated at Berklee, Gregorio draws inspiration from the music of Rubén Blades and Duke Ellington. His sixteen-piece big band is composed of musicians from six countries, which has performed at the Kennedy Center and Blue Note. At last, the Gregorio Uribe Big Band releases its debut album Cumbia Universal. “Cumbia is part rhythm, part genre and part movement,” explains Gregorio. We hear the full range of cumbia: traditional Colombian folkloric rhythm that makes you dance; and sophisticated arranging with thoughtful lyrics that compel you to think. As you move your feet, make sure to look up — this album is the opening salvo of a soaring star.

Yo Vengo (“Here I Come”)
A cumbia which proclaims Gregorio as an artist who innovates (and takes risks). His accordion opens with syrupy, sustained chords, a prelude to bold even rebellious lyrics: “Thank you for the invitation. However don’t forget that tonight I call the shots.” He balances his bravado with modesty, “At a slow pace, Here I come…against the wind.” When an artist listens to his heart, genius is unleashed, and it sounds like Linus Wyrsch’s bluesy, incandescent clarinet solo.

¿Qué vamos a hacer con este amor? (“What are we gonna do with this love?”)
This song depicts how love makes us crazy. It’s a metaphorical story of a guy and gal who visit “love’s” home — only to drink, be merry, and eventually, burn it down. The remarkable Solange Prat from Argentina sings with Gregorio atop a groove which combines the pasebol from Colombia and dancehall from Jamaica. Gregorio (accordion), Sharel Cassity (alto saxophone), and Ignacio Hernández (guitar) add vivid solos.

El Avispao’(“The Cheater”)
What you call someone who games the system – the root of all problems in Latin America, according to Gregorio. He sings about the immoral: a teenager who cheats on her test and a government official who is susceptible to bribes. Yet the music is uplifting and incorporates the rhythms of puya, guacherna and chandé. Jonathan Gómez (alegre drum), Sam Hoyt (trumpet), Mike Fahie (trombone), and Sharel Cassity (alto sax) are featured soloists.

Goza cada día (“Enjoy everyday”)
In this enchanting cumbia and porro based composition, Gregorio makes you forget about yesterday and tomorrow. He sounds an observational note: “There is a sea of anguish that is soaking your thoughts.” Yet it’s important to “enjoy everything at its own time; be aware at every moment; of what life brings to you.”

Cumbia universal
The title track tells the origin of cumbia on Colombia’s Caribbean coast, and how it proliferated throughout the Americas. Cumbia is universal music, rhythm from our collective past. It’s also what brings together the vocalists: since he was twelve, Gregorio has admired Latin legend Rubén Blades and remarks, “I didn’t know tropical music could be so profound until I listened to him.” In 2005, Gregorio met Blades and told the maestro that one day they would work together. “The origin becomes the destiny,” are poetic and prophetic lyrics in this tribute to cumbia. Carl Maraghi’s baritone saxophone surfaces with a passionate solo.

¿Por qué se irá mi niño? (“Why does my child leave me?”)
A stirring elegy about the ritual performed in Colombian villages when a baby dies. For such a dirge to exist — this tragedy happens far too often. Set to a salsa rhythm, Gregorio’s lyrics are searing: “Dressed in sadness / And the sun decided not to shine / Why does my child leave me?” Matthew McDonald amplifies these questions with his searching trombone solo.

Caribe contigo (“With you in the Caribbean”)
A love song inspired by the beautiful landscape of the Caribbean: “I planted five tamarind trees…And told each that you drive me crazy so they could flourish.” The sunny refrain echoes triumphantly over the rhythms of tambora and puya with Mike Fahie (trombone) and Gregorio (accordion) adding joyful solos.

Welcome to La Capital
Hailing from the high class society of Bogotá, Gregorio exposes the racist attitudes that he encounters: “I love black people / When they are young, they are so cute / I love how they sing / As long as I don’t have one for a son-in-law.” Gregorio explains, “These folks haven’t accepted their own roots; we are a mixture of indigenous, European, and African.” Jonathan Powell’s trumpet solo glides over a complex rhythm which combines puya from Colombia and afoxé from Brazil.

Come Together
The classic Beatles song en cumbia. It features Justin Flynn on tenor saxophone and a mashup of guest vocalists who demonstrate the universality of cumbia: reggae artist Meta Dia from Senegal, Sagit Shir from Israel who is part of the electro-pop duo “Hank and Cupcakes,” and jazz vocalist Sofia Ribeiro from Portugal.

Ya comenzó la fiesta (“The fiesta has begun”)
Near the Caribbean, the Colombian town of San Pelayo is host to a street festival that celebrates the rhythm of porro. There’s marching, dancing, drinking. With marks of the traditional fandango, the celebration builds into a frenzy led by the town characters. “The party has begun…We’re going to Gregorio’s place.” Joining the party are Linus Wyrsch (clarinet), Hugo Moreno (trumpet), and Karina Colis (drums).