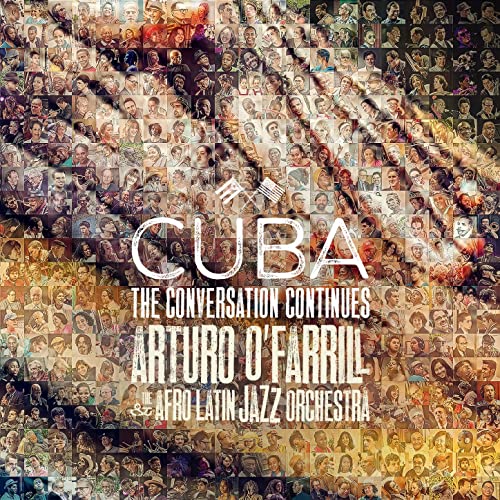 “There is nothing more powerful than an idea whose time has come,” Victor Hugo once wrote. The United States avoided the idea of engagement with Cuba since 1961. But on December 17, 2014, President Barack Obama stunned the world with the announcement that the U.S. would seek to normalize relations with Cuba. The time had come. The conversation had continued. The idea of engagement had prevailed.

At the time of the announcement, Arturo O’Farrill and I were in Havana making this very album. That evening, as Cubans cried, hugged, and flashed peace signs, we gathered in a home on Calle Campanario. “This day is dedicated to the brotherhood of Cuba and the United States!” said our host, Cuban tresero Juan de la Cruz Antomachi, better known as Cotó. “Something big is happening.” Cotó was speaking to a room of musicians and “producers” – supporters who funded the album and traveled to Cuba with the orchestra for a once-in-a-lifetime, bucket-list experience.

It was a special day. And an unforgettable night – more than a year in the making.

Arturo’s Cuban roots are deep; he has been a music traveler to Cuba for years. After he returned from playing the Havana International Jazz Plaza Festival in December 2013, I proposed to him that we record the next ALJO album there. I didn’t have to convince him. He even had a working title: The Conversation Continued.

“Dizzy and Chano began a conversation in 1947,” Arturo says, referring to conguero Chano Pozo’s year-plus of playing with trumpeter Dizzy Gillespie’s group, a cultural conversation that brought North American jazz (at the moment of bebop’s emergence) together with the riches of Afro Cuban music (during a golden era). It changed the music of both countries. “Their conversation,” he continued, “was interrupted by separation, stupidity, and death,” referring to Chano’s untimely demise by gunfire on December 3, 1948.

Arturo asked a prophetic question, “What would the music have sounded like if they (and we) kept talking with each other?” Even Dizzy spoke of a time when there would be neither “jazz” nor “Afro Cuban” but “universal music” (Cuban and American music originates from Africa, after all). Reflecting on our conversation, I realized that Arturo was speaking about the central idea of our trip, the everlasting message of this album: engagement.

So we got to work. Arturo identified his cast of composers. In the U.S.: Arturo O’Farrill, Zack O’Farrill, Earl McIntyre, Dafnis Prieto, and Michele Rosewoman. In Cuba: Alexis Bosch, Bobby Carcassés, Cotó, and Michel Herrera.

Meanwhile, we hustled up the funding and enlisted a small army of supporters. Some 58 of us – 24 musicians, 21 producers, six staff, five videographers, and two photographers traveled to Cuba – permitted by the U.S. Treasury Department from December 15 to 22, 2014. (All told, more than 75 folks, including lawyers, more staff, and more producers helped to make this album). We hadn’t been on the ground 48 hours when President Obama made his historic announcement.

Recorded at Abdala Studios in Havana, Cuba: The Conversation Continues offers a compelling, forward-looking aesthetic – one based on dialogue and engagement. It turns out that musical borders are man-made, just like geographic and political ones. Arturo fulfills Dizzy’s prophecy of creating a universal music, breaking down the cultural constructs of “jazz” and “Latin.” With the news about political normalization, we grasped the potential significance of this album – as a touchstone of diplomatic engagement and cultural healing. There was a sizzle in the studio. And the resulting emotional rush made it onto the album. What a thrill to be there at this auspicious moment and to capture it for all to experience.

The Apollo Theater commissioned this piece for its 80th anniversary and to commemorate the 65th anniversary of the landmark Afro Cuban Jazz Suite, composed by Arturo’s father Chico O’Farrill and featuring Charlie Parker. Like Chico’s 1950 masterpiece, Arturo’s composition cuts to the heartbeat of the music – Africa. It evokes the evolution of Afro Latin music in three movements, with a passing adagio movement between the last two.

(1–3) Movement II: All the Americas   Two distinctive African cultures overlap in this movement: the melodic lines of Islamic Northern Africa and the polyrhythmic drumming of Central Africa. People from these regions met in the Americas as a result of the slave trade, eventually merging musical languages. Arturo infuses the movement with the Afro Peruvian festejo rhythm.

(1–4) Movement III: Adagio  This movement evokes the memory of Chico’s gorgeous boleros, followed by the bright modernity of the following passage.

(1–5) Movement IV: What Now?  Rudresh’s soaring, syrupy solo counterbalances Jim Seeley’s feature in a Palmieri-inspired rhythmic groove. The staccato trumpets shout what we’re all thinking: this music sounds familiar but it’s fresher and edgier. What was a Chico-Bird dialogue has become an Arturo-Rudresh conversation.

Alexis Bosch’s composition builds with tantalizing and provoking suspense. That’s to be expected, as he is a pianist’s pianist, knowing when to hold back and when to attack.

Laying down a solo prelude before breaking into tempo, Bosch elaborates on one of Cuba’s most enduring popular styles, the guajira, with a fierce, orchestrated rhythmic counterpoint that builds from pianissimo to fortissimo.

When Michele Rosewoman arrived in New York in 1978, she noticed a gap between jazz and Cuban music. Jazz celebrated soloists, whereas Cuban music emphasized folkloric tradition. Her ensemble, New Yor-Uba, serves as a cultural bridge with a blended repertoire of New York and Cuban sounds. “Alabanza” speaks the language of jazz, post-bop, Yoruba, and soul.

When Bobby Carcassés gets going, there’s no telling where he will end up! An influential pioneer in modern Cuban jazz, this man swings hard and heavy. And this man can move! He turned the studio session into a descarga, as we listened to his scat singing which is a blend of percussive language and Yoruba-based syllables. The bebop-rich harmony presents a multicolored backdrop for sixteen-year-old trumpeter Jesusito Ricardo Anduz to rip. Alexis Bosch, Gregg August, Jason Marshall, Vince Cherico, and Adel González Gómez add colorful solos during the trading session.

Sigi Feigl and Arturo are kindred spirits. Sigi leads the HGM Jazz Orkestar Zagreb of Croatia, and he commissioned Arturo to write a piece for them. For some reason, the first thing Arturo thought about was vaca frita – beef that is boiled, fried, sautéed, fried again about a dozen times, and smothered with garlic. It’s delicious, but you wake up in the morning with hallucinations. Maybe that’s where Arturo got the melody, in a bout of midnight madness. The melody builds gradually and gives way to David DeJesus’s lyrical saxophone solo which leaves you just shaking your head with admiration. Adam O’Farrill follows with an expansive solo, bounding between low and high registers, demonstrating his impressive range. Arturo brings the band home with a robust and evocative solo of his own.

Michel Herrera is a brilliant Cuban jazz talent. The melody of “Just One Moment”

echoes through the different horn sections, cascading with a powerful effect – creating space for Michel and Adam O’Farrill to trade lines with conviction over a complex big-band groove.

This song became the anthem of the trip. In it, we hear the friendship between Cotó and bassist Gregg August, who arranged this changüí (the traditional popular form from Cotó’s home town of Guantánamo). It was after midnight when we recorded it, with two producers snoozing on the studio couch when we started. Once Cotó joined us in the recording booth to listen to each take, we were all dancing, smiling, and hugging. The studio was en candela. The feeling was deep. As I surveyed the recording booth, I couldn’t tell who was from which country – it was a room full of friends having a grand old time.

Arturo first met trombonist-composer-griot Earl McIntyre in the Carla Bley band, back in the day. This composition, sung by the incomparable Reneé Manning, resurrects the maritime link between New Orleans and Havana. Arturo’s piano solo reaches deeply into each city’s musical traditions. These cultures have mixed for hundreds of years; nineteenth century composer Louis Moreau Gottschalk blended the music of both cities. Even Scott Joplin’s “Maple Leaf Rag” has a Cuban texture. This song takes us even further into the Caribbean, with its brush of Trinidad and Tobago’s soca music. We recorded this song last for a reason: it’s a party song. After a long week in Havana, thousands of man-hours in the studio, we didn’t just want to continue the conversation – we wanted to celebrate it.

Zachary O’Farrill’s composition reminds us that Cuban independence hero José Martí lived much of his adult life in New York, underscoring the centuries-long pre-embargo conversation between the two countries. Honoring Martí’s mission, the composition pays homage to another region of Cuba, and features both the corneta china of Santiago de Cuba’s carnival and a free jazz influence, representing the freedom for which Martí fought.

“If you think politics is powerful, try music,” once said Nelson Mandela. South African vocalist Johnny Clegg’s song “Asimbonanga,” which means “We haven’t seen him,” a reference to Mandela’s prison sentence, became an anti-apartheid anthem in 1987. And it arguably prepared the ground for the end of apartheid a few years later.

Indeed, art can be ahead of the times. During the Cold War, the U.S. State Department recruited “jazz ambassadors” such as Duke Ellington and Louis Armstrong to trumpet liberty abroad, yet they returned home and couldn’t participate fully in democracy. One can argue that the Buena Vista Social Club’s album released in 1997 exposed Americans to Cuban culture, opening the door to the normalization of relations that we see today.

Cuba: The Conversation Continues is a visionary album. It is ahead of its time. The music is novel, edgy, curious, thoughtful, and collaborative. No surprise – we know Arturo as a creative genius who emits top-notch, futuristic music. Yet by imagining the future, Arturo has also given us something timeless.

But this recording isn’t just about music. It’s also about repairing the rupture between the United States and Cuba. Arturo serves alongside Ellington and Armstrong as an American ambassador who promotes cultural conversation despite diplomatic disengagement. Arturo took matters into his own hands, following the spiritual guidance of Jose Martí who said, “Hacer es la major manera de decir” (To do is the best way to say). Incredibly, the night before the historic news, on December 16, Arturo, the ALJO, and some of the Cuban musicians featured on this album, performed at the residency of the U.S. Chief of Mission in Havana.

Our trip was symbolic of the new political current. Despite decades of diplomatic frost, American and Cuban musicians have been collaborating all along, despite all the obstacles the politicians have placed in their way. Now that things are changing, we updated the album title from The Conversation Continued to The Conversation Continues. No more speaking of Cuba in the past tense; wake up to the possibilities of the present and embrace the idea of engagement.

Cotó was right – something big is happening. On this album, you can hear an echo of the future.