Argentina Is the Next Big Opportunity for Emerging Markets Investors 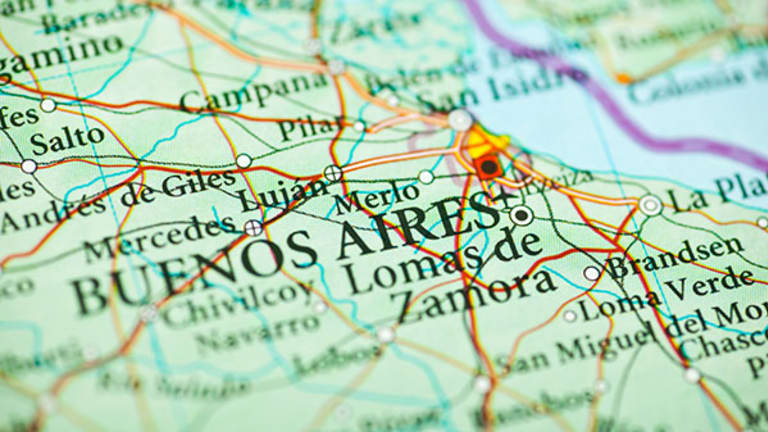 Although it is known for the tango, Argentina is familiar with another dance: the limbo.

Money managers have watched as the country has descended lower and lower in terms of its stature as an investment location.

But that may be changing. After a decade of failed economic policies, recessions, high inflation and defaults, Argentina’s new president, Mauricio Macri, is remaking the country with bold strokes so that it is more investor-friendly.

Argentina is technically a frontier market, as opposed to an emerging market, and it should be at the top of the list of places to invest abroad, especially because its market is up almost 12% year to date.

The country’s market classification is being looked at by Morgan Stanley Capital International, which manages the emerging and frontier benchmarks.

The firm could well decide to upgrade Argentina to an emerging market in 2017. Such a move would unlock $3 billion more in capital flows, a significant amount to a market that trades about $70 million a day and would likely bump up valuations.

The country has been trading at 10 times the 12-month forward price-to-earnings ratio, which is considerably lower than its highs of 23 times P-E over the past 25 years. There is room for a market re-rating.

There are six stocks that trade as American depositary receipts in the United States that could benefit from a potential upgrade. They each meet MSCI requirements in terms of market capitalization and liquidity.

Let’s examine the country’s fall and continuing revival and then look at those ADRs, plus several other potential investments.

The Fall of Argentina
At the beginning of the 20th century, Argentina’s economy was the envy of other nations. Its gross domestic product, which grew at a 6% clip, before the outbreak of World War I, was one of the best in the world.

Argentina was even richer, on a per-capita basis, than France and Germany. Much of this wealth was derived from commodities.

But the outbreak of the war jeopardized international trade, and after decades of political unrest, military coups and failed economic policies, the country’s economy fell behind its once impressive pace. Economists have been befuddled by the country’s historical underperformance, with one saying that “there are four kinds of countries in the world: developed countries, undeveloped countries, Japan and Argentina.”

More recently, Argentina began its decline as other emerging markets devalued their currencies in 1998. By 2001, historically low commodity prices, competitive devaluations of trading partners such as Brazil and the unprecedented strength of the dollar, to which the peso was tied, tipped the economy over the edge.

After more than three years of recession, rioters ousted the government and a new Peronist administration came into power, which defaulted on all financial obligations and froze the process of “peso-fication” of bank assets and liabilities. It was the largest default in modern times.

The peso lost 75% of its value in six months, the GDP contracted 20% and unemployment peaked at 22%.

Argentina was eventually stabilized in the mid-2000s during the presidency of Néstor Kirchner who relied on commodity exports to boost the economy. Kirchner renegotiated terms with the International Monetary Fund, and despite implementing populist policies, Argentina was thought to be on a solid path to recovery.

After his presidency, his wife Cristina Fernández de Kirchner assumed the position, and she implemented a raft of populist measures, from nationalizing the pension system to boosting social-welfare programs.

But the global financial crisis negatively affected Argentina, which again fell into recession in the late 2000s. In 2009, Argentina, which was classified as an emerging market, was downgraded to a frontier market because of its continuing recession, high inflation and limited market liquidity.

Investors shied away from the country, which was flirting with 40% inflation in 2014, and a large currency devaluation.

After 12 years of the same family ruling the country and a century of populist policies, Argentina voted for a new direction.

The New President
Macri became the president of Argentina in December. He is a onetime engineer who studied at Columbia University in New York.

The son of a well-heeled businessman, Macri began his career by working at his father’s construction company and eventually did stints at Citibank and a manufacturing company. A multimillionaire, Macri is well regarded among local businessmen and international investors.

Eventually, Macri entered politics, serving as the mayor of Buenos Aires from 2007 to 2015, giving him a base to launch is bid for the presidency.

Macri’s Reforms
Macri campaigned on an agenda of economic reforms: removing onerous taxes on exports, reducing subsidies, canceling foreign-exchange control and floating the peso. Since he has been elected, he has implemented an ambitious investor-friendly agenda, at a breakneck pace.

His predecessor had implemented the controls in order to stymie inflation, which continued to grow almost unabated. The problem with fixed exchange rates is that the currency became considerably overvalued and Argentine products were less competitive abroad.

After Macri lifted the fixed system, Argentina’s currency devalued versus the dollar nearly 25%.

Second, he slashed personal income taxes as well as those on agricultural and mining exports. His predecessor had slapped taxes on exports as a way to boost government revenue, but farmers were incensed because their goods found fewer international buyers.

“There are no more excuses to not produce more,” he urged farmers who have been hoarding their goods, waiting for a more advantageous regime that would one day loosen tax rates.

Argentina’s tax agency calculated that there are $11.4 billion in goods that can be sold immediately. Macri’s move should jump start soybean exports.

Third, unable to raise money from credit markets because of a pending dispute with creditors, Macri recently secured a one-year $5 billion loan from international banks to boost reserves, which had fallen dangerously low but have increased to $25 billion after a nine-year low. The loan helped to raise confidence that the government has enough cash, ahead of renegotiating terms with disaffected creditors.

Finally, even though Argentina defaulted on its bonds in 2002, it hasn’t been able to put the matter to rest: a group of hedge fund creditors, who were left unpaid by Macri’s predecessors, have effectively locked the country out of the credit markets. His administration proposed a $6.5 billion settlement, or a 25% reduction in value, and a couple of the creditors have agreed.

It looks likely that a disbursement of $2 billion to $3 billion will be the initial payment. Macri still has to get his proposal through Congress, but because he is enjoying a 70% approval rating, he should be able to make it happen.

His reforms are already bearing fruit. His predecessor left a fiscal deficit of 7.5% of GDP.

Macri’s proposals should narrow it to 4.8% this year, with a balanced budget in 2019. The county has a low debt-to-GDP ratio of 18%, so it has the capacity to raise funds for much-needed infrastructure projects.

Already, Standard & Poor’s has increased its rating of the country to B- from CCC+. The U.S. Treasury Department will no longer oppose loans to Argentina from the IMF and other multinational organizations.

President Barack Obama may even visit the country. At the World Economic Forum in Davos, Macri crowed that he expects foreigners to invest $20 billion in Argentina this year.

Coca-Cola has already agreed to pour $1 billion into the nation. BP,Total and other large companies have also agreed to invest.

“Argentina is maybe one of the best alternatives in the next 10 years for investors,” Macri said.

What to Buy?
The six ADRs that could benefit from an upgrade of Argentina to an emerging market are Adecoagro (AGRO) , Banco Macro (BMA) , BBVA Banco Frances (BFR) , Grupo Financiero Galicia (GGAL) , Pampa Energia (PAM) and YPF (YPF). These six would make up about 0.4% of the MSCI EM index and would see a boost in trading, as more emerging-market investors pour into the market.

Two other companies may also be worthy of inclusion in the index: Aluar (AAARF) and Edenor (EDN). Of course, investors should examine the bottom-up investment cases, but these should move up collectively on news of re-classification.

Those looking for less direct exposure can also buy the Global X MSCI Argentina Exchange-Traded Fund, (ARGT) which replicates the blended performance of some of these ADRs, with 20% of the holdings in basic-material names. For even broader exposure, buy the MSCI Frontier Index, in which Argentina has about a 14% weighting.

For a stock with a robust bottom-up case, consider Globant (GLOB), which trades on the New York Stock Exchange. It is a software company that is based in Luxembourg but with significant operations in Argentina and other Latin American countries.

Globant has some 4,300 employees that design “digital journeys“ for blue-chip companies such as Southwest Airlines,United Airlines and Walt Disney. Its high-profile customers belie the company’s small but growing revenue of more than $200 million annually.

With the peso’s devaluation, this company should benefit from healthier margins, too. The stock is already up 100% in the past year, but there is room to grow, as its revenue is increasing about 25% year over year.

This article is commentary by an independent contributor. At the time of publication, the author held no positions in the stocks mentioned.
Kabir Sehgal is the author of New York Times bestseller Coined: The Rich Life of Money And How Its History Has Shaped Us. He is also a Grammy winning producer. Follow him on Facebook and Twitter.