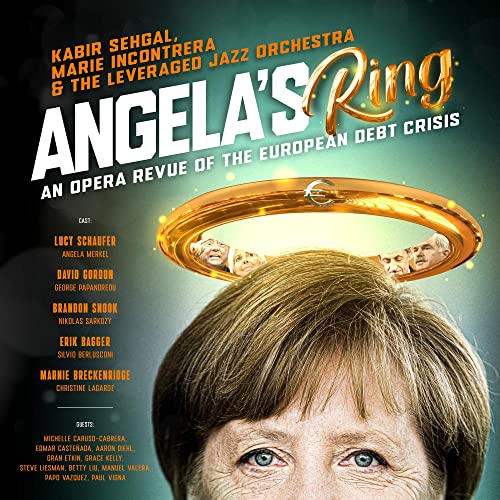 The Seeds of An Idea

I’m a jazz musician and former investment banker. My dual interests in music and finance compelled me to create this very project, Angela’s Ring: An Opera Revue of the European Debt Crisis. In February 2011, I was working at J.P. Morgan in New York, and my colleague invited me to see the opera Nixon in China at The Metropolitan Opera. I was inspired by not just the performances and music but the very concept of turning a political episode into a dramatic staging.

It was during this same period of time that the European Debt Crisis was unfolding in the news. I was following this ongoing event closely. Every day I would receive hundreds of emails from research analysts who were scrutinizing the developments in Europe. I would stare at the flashing numbers on my computer terminal that indicated the changing prices of European currencies and equities. And if that wasn’t enough, my office had televisions with CNBC and Bloomberg on silent, so the images of Angela Merkel, Germany’s Chancellor, and George Papandreou, Greece’s Prime Minister, would often hover above me.

That European leaders were having a protracted dispute about the very nature of Europe wasn’t a surprise. Europe is composed of dozens of countries and millions of people who speak different languages. Many of these countries have gone to war with each other. Of course, it’s difficult to get people who speak different languages and hail from various cultures to agree on a single idea, such as a currency or economic program. There was already a lot of drama in what was happening in Europe, from the protests happening in the streets of Athens to the fierce debates among European officials. I thought the story could be turned into an opera. What’s more, many of the countries involved in the saga like Germany, Italy, France, and Greece had rich musical traditions, which could be explored in an opera.

Angela’s Ring: An Opera Revue of the European Debt Crisis is a dramatic recounting of some of the seminal of the European debt crisis. This is the story of the European debt crisis and how Chancellor of Germany Angela Merkel shoulders the responsibility of saving the euro. But her rigidness and other factors lead to ruin in Greece, and panic spreads to other countries, threatening the very existence of the currency. At the beginning, Merkel and other European officials sign their commitment to the euro. Merkel seduces Greece Prime Minister George Papandreou with the promised riches of joining the Eurozone. After a raucous celebration, Papandreou awakes to a terrible hangover: his country faces a debt crisis. Christine Lagarde, Director of the IMF — cast as a goddess — urges him to be more disciplined. He appeals to Merkel for debt forgiveness, but she demands that Greece implements austerity. Papandreou concedes, and the European leaders bailout Greece. But harsh austerity leads to ruin not only in Greece but endangers Europe itself.
After Papandreou’s resignation, Merkel realizes her intransigence, softens her stance, and agrees to additional bailouts. The leaders recommit to the euro, even though it has exposed contradictions at the heart of Europe.

Before I began writing the libretto, I binged watch operas and read many librettos. I also read several books and articles on Angela Merkel’s life and the history of the European Union and Eurozone. I wrote the first draft of the libretto in 2015. I catalogued the libretto with over sixty footnotes, so that the audience could decipher from where many of the spoken and sung references come. I partnered with Marie Incontrera, a talented composer, in crafting the music the same year.

We had our first reading-performance in a practice room in Manhattan with several singers and my co-producer Herschel Garfein. The feedback from the invited audience was encouraging. We also received many ideas on how to enhance it. Perhaps the most valuable gem of wisdom was that Marie and I should “write what we know.” We had created an opera that sounded like classical music, but we’re both jazz musicians, so we decided to recast the entire opera into something that had a groove. I also re-wrote the libretto so that it was more engaging, more dramatic, and had more rhymes. It became a “revue,” a more jam-oriented operetta with solos and jazz harmonies. In short, we wrote what we knew.

While I wanted to create something engaging and entertaining, I also hoped to convey the gravity of the European debt crisis. It wasn’t just a financial or political crisis but humanitarian one. The toll that austerity had on the people of Greece and other countries was severe. Many lost their jobs, healthcare, and in some cases, their lives. We made sure to include scenes in which protesters could share real-life consequences of the political decisions being made by their leaders. The opera also foreshadows and alludes to “Brexit,” which reopened questions regarding the very nature of the European Union.

I’m a record producer, and I have experience making albums – not staging operas. So my goal was to first make a recording and then maybe eventually stage a performance. We did indeed debut some selections of the music at Carnegie Hall in June 2017. For the album, we gathered a group of terrific jazz musicians, dubbed them The Leveraged Jazz Orchestra, and recorded the music over a several days at a studio in Brooklyn, New York. Marie played piano, and I played bass.
We identified incredible operatic singers to perform the key roles: GRAMMY Award winner Lucy Schaufer, Angela Merkel; Brandon Snook; Nicolas Sarkozy, David Gordon, George Papandreou; Marnie Breckenridge, Christine Lagarde; Erik Bagger, Silvio Berlusconi. It was a remarkable experience to work with such amazing artists as they turned the written word into terrific and memorable performances.

This project has been many years in the making. It is an in disciplinary work that draws upon international politics and finance, big band jazz music, and operatic performances. I hope that this production inspires more people to connect the dots between different fields and create works of their own to share with the world.