An Argentinian in New York 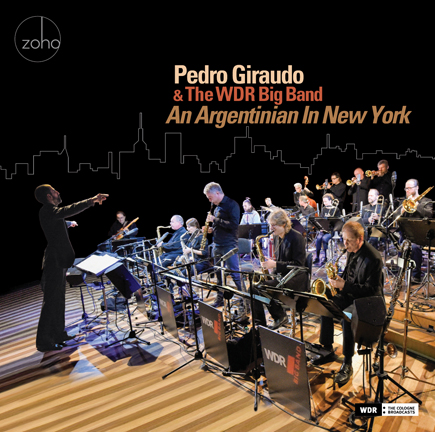 On November 29, 2016, the WDR Big Band performed a program of six of my compositions to a packed house at the WDR Funkhaus in Köln. Here I was, an Argentinean who had come to New York 20 years prior, conducting one of the great big bands in the world – in Germany!

The band was on fire from the instant the concert began.
Unlike those occasions when I perform with my own big band in New York, when I not only conduct, but also play the bass, for this performance my sole role was conducting, giving me the opportunity to connect in a more concentrated manner with the music that was coming out of the band, without having to focus on my bass playing as well. It was an exhilarating experience and I think the resulting performance, as you will hear on this recording, reflects that.

The pieces on this recording are in the order they were performed at the concert.

Mentiras Piadosas (“White Lies”): A friend who is a psychologist mentioned that it is impossible to be a functioning member of society without sometimes lying. Initially, I found the statement shocking, but I thought about it and realized it’s true: one does alter statements on a regular basis so as not to offend people, among other good reasons. The idea of twisting things around to fit certain situations is an important aspect of this composition, which features a recurring theme that continues to change its way throughout the piece. (Commissioned by Hiro Noguchi.)

Chicharrita (“Cicada”): Osvaldo Pugliese (1905–1995) was for decades one of the most important figures in the history of tango. As composer, bandleader and pianist, his unique style was characterized by a deep, rich, lush sound. Ironically, in spite of this characteristic, his voice was very high pitched, which earned him the affectionate nickname of “Chicharrita”. This is my humble and respectfully playful tribute to him. (Commissioned by Hiro Noguchi.)

La Ley Primera (“The First Law”): This piece is inspired by the famous long poem “Martin Fierro” by José Hernández (1834 –1886), and Argentinean children grow up familiar with many quotes from it. One of my favorites is “Los hermanos sean unidos, porque esa es la ley primera, y si entre ellos se pelean, los devoran los de afuera” (“Brothers should be united, because that’s the most important law, and if they argue, they will be devoured by outsiders”). This is one of the simplest tunes I have written in a long time; it’s based on the Argentine rhythm and form of the zamba, almost unaltered, and features mainly one voice: Johan Hörlén on alto sax.

Lapidario (“Merciless”): In Spanish, lapidario is an adjective that we Argentineans often use idiomatically to describe a comment that is merciless, cutting, and hurtful. This piece has two contrasting themes, one very aggressive based on the imposition of different major and minor triads; the other more melodic and nostalgic, each reflecting the different aspects of the lapidario comment.

Eir: The struggles that women have to deal with on a daily basis because of inequality and a society based on patriarchy are gradually coming to the forefront of our consciousness, not only to women but to men. After reading a heartfelt and painful statement by Shannon Barnet, the WDR Big Band trombonist, about her many struggles as a woman in the male dominated jazz world, I decided to write a piece to feature her that depicted women as resilient and silent fighters. After some research about female warriors, I found Eir, the medieval Norwegian Valkyrie of peace and clemency. This piece is devoted to these ideals.

Desconsuelo Suite (“Disconsolation Suite”)
Written in 2006, this is still one of my favorite compositions. Like most of us, I went through moments in life where no consolation can be found and the only solution is acknowledging the pain and dealing with it. The suite is comprised of three movements and an introduction, following the classical concerto fast-slow-fast structure:

I : Preludio de Bombo Legüero
During the rehearsals prior to the concert the idea came up of featuring the wonderful Bodek Janke playing an ad libitum introduction to the suite on the iconic Argentine drum, the bombo legüero, to set up the correct mood. He certainly did!

II : Mate Amargo (“Bitter mate tea”)
Mate is a tea typically drunk out of a dried gourd with a metal straw (bombilla) in the southern part of South America. It is a stimulant, similar to coffee, and very bitter when had without sweeteners, which is exactly what Mate Amargo means: unsweetened (or literally “bitter” mate). This movement is based on the folkloric rhythm of chacarera, a Spanish-influenced Argentine style written in 6/8 which constantly superimposes the feel of 6/8, 3/4 and 2/4 meters.

III: Con Un Nudo En La Garganta (“With a knot in the throat”): Just as the expression connotes the inability to express something adequately, this piece tries to convey what words cannot. Out of all my compositions for big band, this is unquestionably the one that, both in spirit and in style, is closest to tango, the distinctive urban sound of the Rio de la Plata. 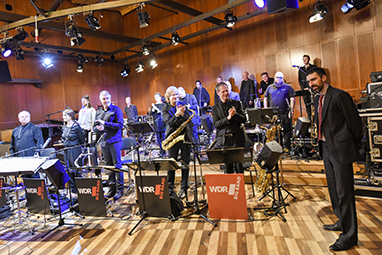 IV: La Bronca (“The rage”): The closing movement is a forceful and propelling piece written in 11/8 which features challenging lines for the saxophones. For one of the recurring sections I used and expanded a fragment of a harmonic progression found in the Lacrimosa section of Mozart’s Requiem. Contrastingly, the solo section is mostly in a simple blues form. – Pedro Giraudo

An Argentinian in New York is ultimately about a man, a maestro’s search for meaning in his adopted home. Hailing from Cordoba, Argentina, Pedro Giraudo is a celebrated and virtuoso bassist, bandleader, composer, and arranger who is a veritable creative genius.

His musical career reads like an all-star lineup, as he’s performed or recorded with the likes of Ruben Blades, Paquito D’Rivera, Pablo Ziegler, Regina Carter, Branford Marsalis, among others. His discography as a band leader is equally as impressive, having released five albums that are all critically acclaimed. On the ZOHO label, they include “Cordoba” (ZM 201106, Downbeat **** 4 stars), “Cuentos” (ZM 201503, Downbeat *** 4 stars), and the upcoming “Vigor Tanguero” (ZM 201803), simultaneously released with “An Argentinian in New York”.

Moreover, Giraudo leads three bands: a big band, jazz orchestra, and sextet. No doubt, he is prolific, but not at the expense of quality, as he crafts his compositions with painstaking detail and renders his big band harmonies with sophistication akin to the great Duke Ellington. His music both honors long-held traditions while also advancing a new sound that fuses his sparkling ideas with the remarkable musicians found in New York. Those in the music world know, when Pedro calls, the grandmaster is on the line.

On this album, Giraudo observes, describes, and explains New York through a colorful and multi-hued musical prism. For those new to the Big Apple, as well as lifelong residents, you will hear something new, fresh, even provocative in these seminal pieces. That’s because Giraudo imbues his music with both personal and profound meditations on the meaning of home.

He realizes and furthers the notion that blending is beautiful, mixing is magnificent. Indeed, this album could have very well been titled “Melting Pot,” invoking that vivid American metaphor, as Giraudo explores his native Argentina (for example, “Chicharrita” an homage to tango master Osvaldo Pugliese) with subtle references and overt rhythms, juxtaposing it with the musical modernity of American urban living (for instance, “Eir,” which draws attention to the struggle of women not just in the jazz world but across most sectors and industries). Giraudo has something to say. And this production is a personal testimony on the challenges and opportunities of our time.

Six of Giraudo’s brilliant compositions are brought to life with the spectacular performance of the WDR Big Band. Like a well-oiled machine, these musicians hit each note with precision, and the respective brass and reed sections fall into place like pennies finding their slots. Here you have a bandleader operating at the top of his game, paired with arguably the best big band today.

This isn’t just a recipe for success. It’s a staging for a musical triumph that thankfully you can listen to again and again.