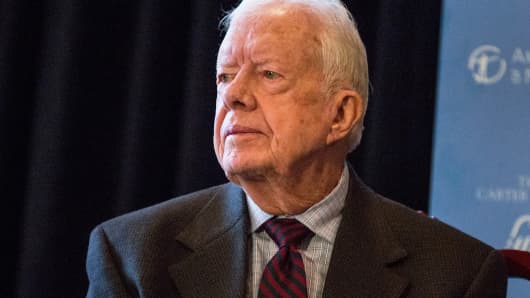 I’m sad to learn about former President Jimmy Carter’s cancer diagnosis. Having grown up in Atlanta, where Carter keeps his office, I am blessed to have gotten to know him over the years — and I wish him and his family the best during this difficult time.

Occasionally, we would meet in his office or his home in Plains, Ga., to discuss everything from the books that he was reading (most recently, “Genghis Khan and the Making of the Modern World”) to world events like China’s history of currency devaluations. I always took notes.

With China lowering its peg to the U.S. dollar by 3.5 percent in the last few days, it’s timely to consider the former president’s thoughts on the topic. Here are some relevant bits from our conversations:

I asked former President Carter in 2010 if the U.S. could force China to appreciate its currency.

“No. And the more we antagonize China, the more it will drag its feet,” Carter said. ” I normalized diplomatic relations with China [in 1979]. They are gradualists and can’t be coerced into doing what America wants. Plus, we have imbalances with several countries — not just China — and we’re not going to ask all of them for a correction. I applaud President Obama for not ceding to populist demands in the House calling for China to appreciate its currency.”

American consumers are over-leveraged and support China by buying their cheap exports. So, if we can’t force China to appreciate its currency, is there something we can do to curb our own spending and get America to deleverage?

“During my presidency, I tried to make the case that Americans should be conservative in their spending,” Carter said. “I made a speech to the nation saying that we must cut back. This meant conserving fuel and being economically prudent. The country was going through a tough time economically during my presidency, and Ronald Reagan campaigned against me promising to return America to be a shining city on a hill.”

Carter said Americans have started to deleverage to a degree since the 2008 financial crisis but perhaps not as quickly or as much is necessary.

“I think President Obama should make it clear to Americans that we need to get back to American virtues of thrift and frugality,” Carter said. “The president has the largest megaphone and he’s not talking about these issues. But then again, it’s not popular to tell Americans to be better about how they spend their money.”

Carter said he doesn’t think there is much that President Obama can do to accelerate U.S. economic growth.

“When it comes to the economy, there is so much that’s out of the President’s control — like China devaluing its currency. By the time an economic decision reaches the president, so much has already been decided such as monetary and labor policies.”

We’ve discussed the global economy at length over the years. But for the sake of brevity, here are three points that he’s made to me in the past year:

1. He said that President Obama would be wise not to vilify Wall Street but to include them in a constructive discussion about how to grow America together: how can Obama recruit bankers to help finance America’s future?

2. He thinks that financial stability may be an appropriate mandate for the Federal Reserve alongside price stability and employment.

3. He decried the growing inequality in the world and said that this issue is one of the biggest problems today. He has spent much of his post presidency trying to help those who don’t have as much through the work of the Carter Center.