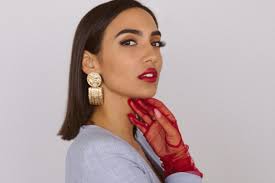 It’s the only thing that truly moves me. A form of expression that has basically saved me in many moments of my life. It’s my form of self therapy and the want to create and go for my career is a calling that comes beyond me. I don’t think I was put on this earth to do anything else that doesn’t involve music to a certain extent.

I sing every single day. To be honest, I haven’t been taking my proper voice lessons but I try to avoid any foods that give me acid reflux & and I run 2 miles a day to work on my breath. I will also do vocal work outs in the shower every so often but mostly when I have a recording session.

After finishing my contract with Universal, my grandmother dying and breaking off my long term relationship (all during quarantine may I add) I had a lot of things to say and genuinely needed to escape. I did that by going to the studio non stop every single day for about 5 months straight.

I’ve always took comfort in finding the silver lining of things so the album touches on duality, contradicting sides that blend together beautifully. Ying yang. I had never wanted to works on an album because I didn’t think I was ready to work on a lengthy project & at that moment my gut told me otherwise, so I listened. It’s not quite finished yet but conceptually it’s all there. But I will probably make changes and adjustments till the last minute.

I honestly went through it with the best intentions and best foot forward. And thankfully everything ran quite smoothly. I guess the biggest obstacle, if you can even call it that, was at the beginning where I was making a ton of music and they were all very different, so making all the songs feel cohesive and start making songs that matched the vibe, that kept changing all through out, was kind of the hardest thing. Staying on track.

Uff. I have so many collaborators. Many songwriters, a lot of women at that. I have a song that was co-written and produced by Kuinvi. I have a song w a great female artist named Sessi. There’s a track with producer Maffio & his artist Calacote who is so talented. I have a track with my friend and one of my fav artists LateNightJiggy though I’m still deciding if the song will go on album or not…..