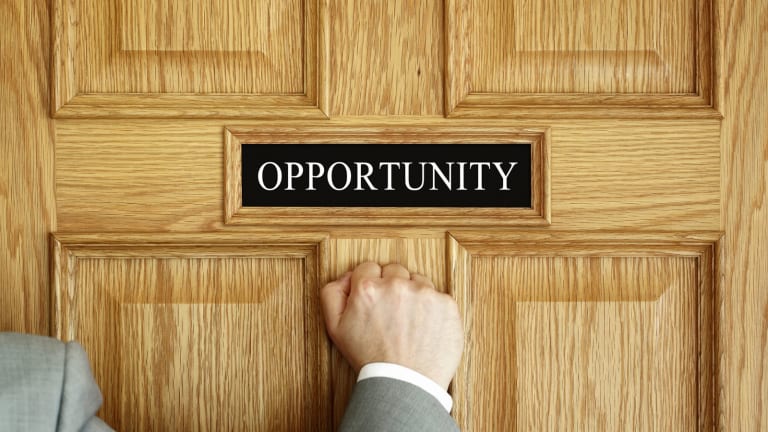 “Greece can’t afford to default,” explains Wilbur Ross, the billionaire investor who owns a significant stake of Eurobank Ergasias. Despite a 77% decline in the bank’s share price, he remains confident that his investment will eventually pay off, and that Greece will remain part of the eurozone. At the moment, his view seems misguided, but Ross has a track record for identifying opportunities: he invested in the Bank of Ireland in 2011, during an economic crisis, and sold his investment at a hefty profit in 2014.

Ross’s contrarian position got me thinking: What does he know that we don’t? And how does he exhibit such temerity during turmoil? Wanting to learn more about how he and other leaders identify opportunities, I spoke with someone who knows many business titans personally. A prominent television producer, Lori Ann LaRocco is the author of Opportunity Knocking (featuring an afterword by Ross), which adeptly catalogs how great leaders see promise during periods of uncertainty, from Steve Case who built AOL despite losing an early deal with Apple (AAPL) to Harold Hamm who made a fortune in oil, in the face of persistent volatility in the energy market. According to LaRocco’s absorbing book, here are but three governing principles that great leaders live by, and which help them identify opportunities:

1. Play the Long Game
During the throes of the 2008 financial crisis, there was considerable pressure for private equity firms to shorten their investment horizons and return money to investors. But David Rubenstein, co-founder of The Carlyle Group, remained steadfast. “If you are able to have a long-term horizon, you will probably do well because you are going to counter the general population,” he told LaRocco. Rubenstein plays the long game, realizing that he can spot opportunities when he’s not caught up in the noise of the moment.

But it’s difficult to retain long term focus. LaRocco explains that today’s business leaders operate in a world of instant gratification. There’s pressure to deliver short term results. However, she instructs, “You have to manage based on what you believe the company will be. Don’t…react moment to moment.” In the case of Rubenstein, she notes that he has delivered consistent results over the long term, a roughly 25% annualized rate of return. In the case of Ross, she says, “He has a long term strategy. He sees an opportunity in Greece. He isn’t distracted by the noise.”

LaRocco follows this principle in her life, too. Working in the news industry, it’s easy to get caught up in what she calls the “short termer” mentality of the news cycle. In her book, she tells of a time when she learned that a congressman was about to publicly blame a regulator. There was pressure to break the story, and she spent hours trying to fact check it but couldn’t confirm it. In the end, she discovered the story was untrue. “The quest to be first can sometimes lead to sloppiness,” she writes. By focusing on the long term, she killed the story, and retained her credibility as a journalist.

2. Find a Mentor
With only a high school education, Harold Hamm built Continental Resources into an energy powerhouse and became a billionaire oil tycoon. The youngest of thirteen children, he self-educated himself about the oil industry by studying the lives of notable prospectors like J. Paul Getty. But his career began to flourish when he started to soak up the wisdom of those around him: “I wanted to learn everything I could from whoever was around me. In the oil and gas business, people are generous and they want to help you — many became mentors to me,” he told LaRocco. By leveraging the intelligence of others, he realized that there wasn’t just an opportunity in trucking but in drilling for “black gold,” so he started what would become Continental Resources (CLR).

“When you surround yourself with mentors like Harold did, you can more readily spot opportunities. Use your mentors as a sounding board,” LaRocco told me. In her book, she elaborates on this point, “If you are new…see if your company has a mentor program or find someone else who is willing to mentor you.” LaRocco has internalized this principle and serves as a “work mom” to her “mini-me,” someone she mentors at work.

3. Embrace Failure
When Steve Case left his corporate gig for a start-up, he didn’t know the roller coaster ride that awaited. During his first board meeting, he learned of the start-up’s anemic sales. The company shuttered, and Case could have given up. But he founded Quantum Computer Services in 1985 which eventually became AOL. “We were taking lessons learned from [our failed start-up]…without the failure… there would have never been the success of America Online,” he explained to LaRocco.

“The hallmark of successful leaders,” says LaRocco, “is that they learn from mistakes — and get back in there and try again.” Recognizing opportunities becomes easier the more experiences and failures that one endures. “You can distinguish between what is or isn’t worth it,” she says.

It’s important to remember even the most self-evident principles during times of crisis, such as the financial turmoil in Greece. That Ross is sticking to his Greece investments demonstrates his unflappable belief in the long game. After all, the mark of a leader isn’t what she does during good times, but how she sticks to their principles during turbulent times. Even if Ross’s investment goes awry, he’ll inevitably learn from it and bounce back to search for the next lucrative distressed asset.

Ross notes in the afterword of LaRocco’s book that high achievers “share basic personality traits.” Thanks to LaRocco, we have a compelling compendium of the traits and principles that help successful business leaders recognize when an opportunity comes knocking.

This article is commentary by an independent contributor who does not own a position in any of the stocks mentioned. Kabir Sehgal is the author of New York Times bestseller Coined.