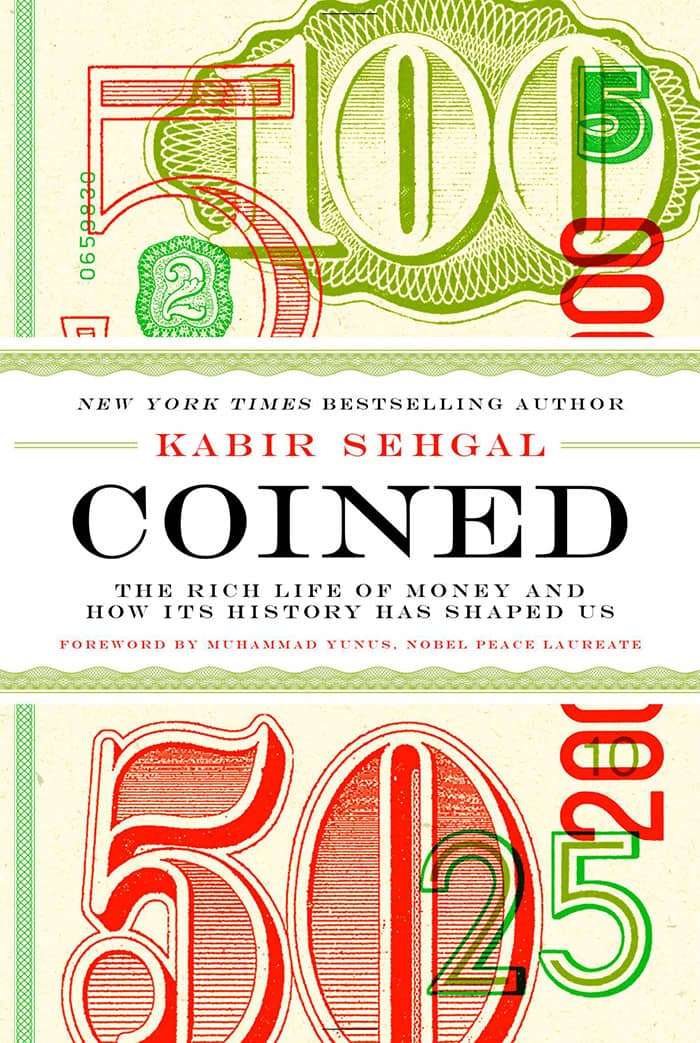 The importance of money in our lives is readily apparent to everyone–rich, poor, and in between. However grudgingly, most of us accept the expression “Money makes the world go round” as a universal truth. We are all aware of the power of money–how it influences our moods, compels us to take risks, and serves as the yardstick of success in societies around the world. Yet because we take the daily reality of money so completely for granted, we seldom question how and why it has come to play such a central role in our lives.

In Coined: The Rich Life of Money And How Its History Has Shaped Us, author Kabir Sehgal casts aside our workaday assumptions about money and takes the reader on a global quest to uncover a deeper understanding of the relationship between money and humankind. More than a mere history of its subject, Coined probes the conceptual origins and evolution of money by examining it through the multiple lenses of disciplines as varied as biology, psychology, anthropology, and theology. Coined is not only a profoundly informative discussion of the concept of money, but it is also an endlessly fascinating and entertaining take on the nature of humanity and the inner workings of the mind.

“Simply relax and float along the current with Sehgal, and find yourself in the Galápagos, the Federal Reserve’s gold vault, a neuroscience lab or ancient Mesopotamia, all the while having no idea where you are headed next…Sehgal is a tireless and eloquent guide, and knows just how long to stay at each stop.”

“Kabir Sehgal has done us a great service in writing this book. He has presented in this book everything that money has meant to people over the centuries and with a multidimensional perspective. He has prepared the ground for us to take it forward, to give new meaning to money, to assign it new roles in our lives, and imagine the future of money as a foundation upon which we can build the future of the world we all cherish. Thank you, Kabir.”

“Coined doesn’t resemble any of the usual text books on money. For one thing, it’s actually fun to read–and Kabir Sehgal will stimulate your thinking about our financial crisis and banking.”

“An exceptional examination of the history of money. Kabir has written an engaging narrative that spans thousands of years and introduces readers to important people who have impacted the chronicle of currency.”

“The best things in life are free, but ever since civilization began money has had a profound impact on humanity. Kabir’s book brings the story of currency to life and is worth spending a few of your hard-earned coins on.”

“Well-written. Clever. Innovative. This amazing book will get you thinking about money in completely new ways. If you want to understand how money has impacted the human condition, for better or worse, and how it will continue to shape our behavior, read this book.”

“Kabir Sehgal has tackled the topic of money and written a fascinating account that weaves together history, philosophy, and personal anecdotes. He provides insights that are both riveting and thought-provoking.”

--Walter Isaacson, bestselling author of Steve Jobs and President of the Aspen Institute

“Coined is a world history of currency that looks at the different forms money takes across time and across cultures. Mr. Sehgal’s anecdotes are wide-ranging and include the birth of exchange in the Galapagos Islands; the art sought after by coin collectors in Vietnam; a tour of the Federal Reserve’s vaults in New York; and the way bees trade pollen in the hive.”

“Kabir Sehgal has created an ideal book for anyone interested in understanding how money has impacted our world. His thought provoking and impressive writing style makes this an enjoyable and educational read.”