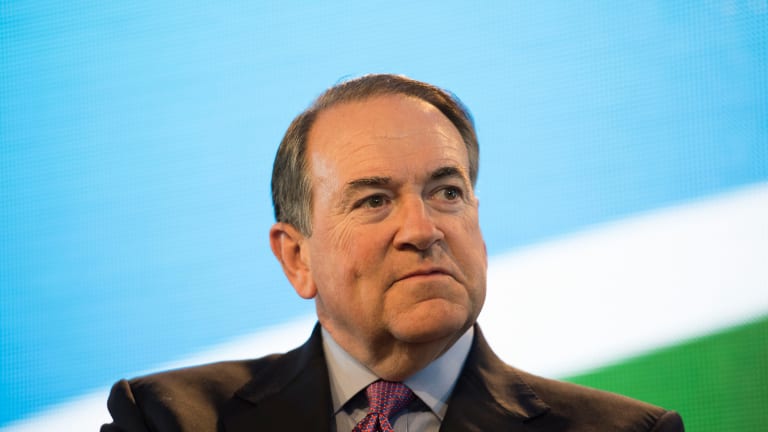 Can America’s economic growth rate rival that of China’s?

Former Governor Mike Huckabee has claimed that his tax reform proposal will help America grow at 6%, higher than the 4% that Jeb Bush has promised. Huckabee’s rosy projection has America growth rate in the same league as China’s recent 6.9% showing.

So what is his silver bullet to such fast-paced growth? The flat tax, or as it’s known in policy circles — the FairTax.

The FairTax is a policy put forth by the Americans for Fair Taxation (AFFT), a nonpartisan organization based in Houston, which seeks to overhaul the national tax code. The FairTax is straightforward: Replace the federal income tax, as well as the corporate gains tax, payroll taxes, estate taxes, and several other taxes with a national sales tax of 23% in the first year. The tax rate would adjust every year based on revenues collected by the US Treasury.

According to Huckabee’s campaign website, he sees four key virtues of the FairTax. First, it would help repatriate offshore investments and boost the number of jobs at home. “I guarantee you we will goose the economy if we bring $11 trillion of working capital back to this country,” he has said.

Second, it would lessen the tax burden on everyone while broadening the overall tax base.

Third, it would make sure that criminals and illegal immigrants would pay their fair share of taxes. “Everybody gets in the economy–no more underground economy. Drug dealers, prostitutes, pimps, gamblers, non-Republicans–all of those people out there will be paying taxes. Nobody’s working under the table,” he said.

Fourth, it would be less susceptible to abuse by policy makers, as your tax records wouldn’t have to be kept on file at the Internal Revenue Service, a government agency which Huckabee has called “a criminal enterprise.”

Huckabee Isn’t the Only Republican Who Wants a Flat Tax

Huckabee isn’t alone in supporting a flat tax. Ben Carson has modeled his tax proposal on the Biblical practice of tithing. “You make $10 billion, you pay a billion. You make $10, you pay one [dollar],” he explained on Fox Business. He hasn’t specified whether he would replace other taxes such as the capital gains tax, yet he is confident that his plan would be revenue neutral. However, the Citizens for Tax Justice, a nonprofit organization that specializes in tax policy, estimates that Caron’s plan will raise only 28% of the revenue needed to fund the government.

Other republican candidates that have called for a flat tax or are mulling the merits of such a plan include Ted Cruz, Rand Paul, John Kasich, and Rick Santorum. In a recent poll, 59% of republicans supported adopting a flat tax, whereas only 25% of democrats and 39% of independents favored the measure.

The Two Big Problems With the FairTax

There are two cardinal problems with Huckabee’s plan. First, it’s regressive and effectively taxes poor people at a higher rate. “The average rate of one of the lowest income group would exceed 33 percent, while the average of the top group would fall to less than 16 percent,” determined the Urban-Brookings Tax Policy Center.

Huckabee contests the findings, saying that his plan would come with a monthly “prebate,” in which families would receive a rebate payment up to the poverty line. In other words, poor families would receive support to offset the disproportionality of taxes on their spending versus the buying behavior of wealthier consumers. But the Urban-Brookings Tax Policy Center finds that even with a prebate, which doesn’t grow the budget deficit, taxes would likely have to be increased on the middle class, as illustrated by the below graph that comes from the US Department of Treasury.

The Advisory Panel on Tax Reform, which was composed of nine bipartisan members during President George W. Bush’s administration, found that the national sales tax would have to set at 34% in order to fully replace the income tax. That is higher than Huckabee’s call for a 23% flat tax rate, or even a 30% rate, which has been proposed by others who want to implement a flat tax.

The Advisory Panel poked a hole in the assumptions of those who endorse the FairTax: “[They] assume that there would be absolutely no tax evasion in a retail sales tax. The Panel found the assumption that all taxpayers would be fully compliant with a full replacement retail sales tax to be unreasonable.” It’s reasonable to believe that some would try to evade the onerous 23%-to-34% national sales tax (especially if it’s added to state sales taxes too).

Why Huckabee’s 6% Growth Forecast Is Unrealistic

Here are the numbers. At the beginning of Obama’s presidency, there was an output gap of $1.1 trillion, but it has been narrowed to $446 billion earlier this year. Irwin finds that if the U.S. economy continues to grow around 2.2% annually, there will likely be no gap when the next president takes office. That means the economy would be operating near its full capacity.

So it’s hard to see how we will achieve 4% GDP growth let alone 6% growth. Irwin concludes, “Either the technocrats at places like the C.B.O. and the Fed must be wildly underestimating the nation’s growth potential today. Or a revolution in American productivity must be on the way. Neither of those are things that a president has much control over.”

The next Republican Presidential debate starts at 8 p.m. ET this Wednesday, 10/28, but TheStreet.com will be covering it all week! Tune in for stories, videos, and more, and make sure to follow us at @TheStreet on Twitter for live commentary during the debate.