Who Will Win Argentina’s Presidential Election? And Which Stocks Will Benefit? 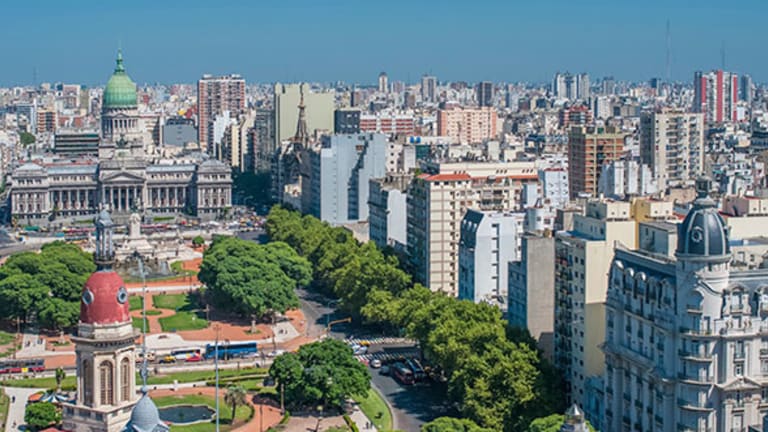 On Nov. 22, Argentines will go to the polls to elect a new president. It’s a watershed moment for the country, as the late Néstor Kirchner and then his wife, Cristina Fernández de Kirchner, have held the president’s office for 12 years — long and arduous years for Argentina.

During their back-to-back tenures, Argentina has experienced recession, high bouts of inflation, disputes with creditors and fiscal deficits. In 2009 it was downgraded from an emerging market to a frontier market. Many blame the populist policies of the Kirchners as causing and exacerbating the country’s problems. Therefore, the prospect and promise of a new president has some thinking that Argentina could finally turn the page on its lost decade. Argentina could shift to the right and adopt more market-friendly policies, which would benefit local and foreign investors.

So who will win the upcoming election? Argentines will choose between two candidates during this Sunday’s runoff election: Mauricio Macri, a businessman and current mayor of Buenos Aires; and Daniel Scioli, the former vice president of Argentina and the governor of Buenos Aires Province. A recent poll shows Macri leading Scioli by 8 points. Scioli is viewed as an incumbent and was endorsed by the current president. That Macri is leading suggests that Argentina is ready for a more dramatic change from Kirchnerism and wants to finally embrace the opposition party. “This is a problem of trust,” Macri said in a recent interview. “This government has destroyed trust among Argentines and the world. We are going to put Argentina back on a path to growth and back into the world.”

During the latest presidential debate, Scioli failed to disassociate himself from the Kirchners while attacking Macri as wanting to dismantle Argentina’s welfare programs. Macri counterattacked Scioli by saying, “You’re not change. You chose continuity.” Macri also made the case that Argentina’s roadblock was in fact its own government: “Argentina’s problem is not the dollar. It is a government that does not stop lying and has destroyed confidence in our country, which is why there’s no investment or growth. Inflation has diluted the income of our retirees and our workforce.” Macri also said that he would emphasize market-friendly policies that would help generate confidence among local and foreign investors. Macri added that he would implement an ambitious infrastructure program of about $16 billion, cut taxes to attract investments, reduce tariffs to encourage trade and unwind many capital controls.

If Macri wins, Argentina’s market should respond favorably. There are a few companies with exposure to Argentina to watch: 98% of Americas Petrogas‘s revenue comes from the country, 45% of Silver Standard‘s (SSRI) total assets, 18% of Mercado Libre‘s (MELI) revenue, and 8% of AMBEV‘s (ABEV)  revenue. These stocks might appreciate on news of Macri’s potential victory.