Who killed the music industry? 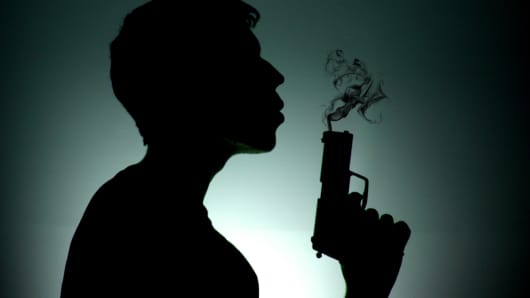 It took a pop singer to question why people get music for a song. Earlier this summer, Taylor Swift publicly shamed Apple for planning to offer a free trial of its music service: “We don’t ask you for free iPhones. Please don’t ask us to provide you with our music for no compensation.” Her essay was remarkable not just because it challenged a giant corporation, but because it was a searing reminder of the anemic state of the music industry. Apple isn’t the only guilty party. Almost all of us expect free music, leading Quincy Jones to remark, “Honey, we have no music industry.” If video killed the radio star, who slayed the music industry? There are 3 culprits.

The first culprit: leakers. In his revealing book, “How Music Got Free,” Stephen Witt dispenses with the notion that music piracy began as a crowd-sourced phenomenon. Indeed, it certainly went that way. But it started with a small group who systematically leaked CDs, so that they could sell them at the flea market. He tracked down one of the original leakers, a man named Bernie Lydell Glover who worked at a CD manufacturing plant in North Carolina during the 1990s. Witt describes Glover as “the world’s leading leaker of pre-release music.” Glover had invested $2,000 on burning devices so that he could re-produce the albums for others, and which he sold out of the trunk of his Jeep.

But with the advent of the mp3, Glover thought, “[it] could reproduce Tupac at one-eleventh the bandwidth, and if Tupac could then be distributed, free, on the Internet, what the hell was the point of a compact disk?” Eventually, he and other leakers distributed music via mp3s, and across the Internet, which started the wave of global piracy that services like Napster and Bit Torrent abetted.

The second culprit: labels. For one thing, record labels should have instituted stricter safety measures at CD manufacturing plants to prevent leakers. But also, they were slow at adopting new technologies like mp3s and streaming services. They rightfully sued piracy purveyors, but could have been quicker at creating an online marketplace to meet burgeoning demand. Suffering shrinking revenue that has been cut in half, to $15 billion globally since 2000, the major labels capitulated to Steve Jobs: no longer would consumers need to shell out $20 for an album but 99 cents for a song. As a result, singles have outsold albums for the last decade. Record companies did themselves in.

The third culprit: musicians. Musicians deserve blame for their ignorance. I’ve worked with too many artists who say their “eyes glaze over” when they read record label contracts. It’s important to know all the ways that a label will screw you. For example, some labels don’t incorporate digital sales into their retail channel numbers, so the overall sales numbers look smaller. And even though international digital sales are growing, labels have been known to decrease international royalty payments to artists. Shady practices by labels have harmed even top-selling artists: during the 1990s, despite selling millions of albums, the Back Street Boys reportedly received no royalty payments. When you can sell out Madison Square Garden, you should dictate your terms. That’s why it’s powerful that Taylor Swift spoke up, using her perch to advocate changes that affect the entire industry.

Despite the lackluster state of affairs, some entrepreneurs are undeterred. Binta Brown, founder of the music company Fermata Entertainment, believes musicians will make more money if they retain the rights to their work. Her firm employs a venture-capital approach, infusing cash for equity in the works of artists: “We treat each artist as an entrepreneur,” she explains. Fermata enables musicians to start earning right away, instead of waiting for advances to be recouped and royalties to kick in. It’s a novel approach, and one that the music industry should consider writ large: align interests and (really) share profits.

To resurrect the music industry, it will take musicians and entrepreneurs not only forming new types of partnerships but raising the public’s awareness about unfair business practices. That’s why Taylor Swift’s letter is her greatest hit yet.

Commentary by Kabir Sehgal, author of the New York Times best seller “Coined: The Rich Life of Money And How Its History Has Shaped Us.” He is a former vice president at JPMorgan and Grammy-winning producer. Follow him on Twitter @kabirsehgal.