Two Ways to Beat Donald Trump at His Own Game 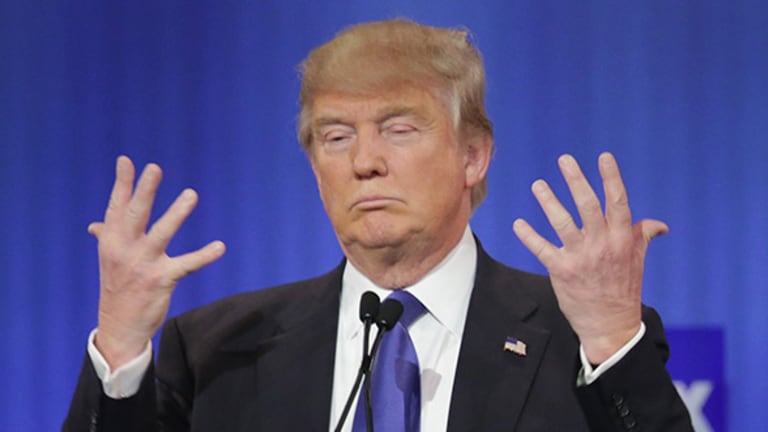 After huge primary wins in Florida, Illinois and North Carolina, Donald Trump is more than halfway to securing the delegates he’ll need to become the Republican nominee to run for President of the United States. Many in the GOP have been scrambling to stop him, but mostly failing. So, what should Trump’s opponents do?

If you can’t beat him, join him.

That’s what New Jersey Governor Chris Christie believes, anyway. He endorsed Trump after losing to him in the New Hampshire primary. But there is another way to “join” Trump — by stealing his tactics, and using them against him (and no, this doesn’t call for slinging personal insults, like what Florida Senator Marco Rubio tried).

It’s not a mystery as to how Trump has been able to parlay his career as a television personality into a successful presidential candidate. Presidential campaigns are public spectacles, played out on screens across the country. Trump’s game is the press: He serves up entertaining and outlandish content, and the media helps distribute it for the sake of higher ratings. Last fall after one of the debates, he received 72% of television broadcast news coverage versus his competition. One estimate is that he benefited from $23.4 million in free media exposure last year. CBS Chairman and CEO Les Moonves noted that Trump’s campaign “may not be good for America, but it’s damn good for CBS.”

Therein is the way to slay the Trump campaign: Get more media exposure. And here are two ways for Trump rivals Ted Cruz, Rubio, and John Kasich (and, eventually, Hillary Clinton) to do just that.

The remaining candidates should turn their campaigns into a highly produced weekly documentary installment on Netflix, Amazon, or Hulu.

One of the most successful political documentaries of recent times was Mitt, which was an intimate look at Mitt Romney’s 2012 presidential campaign and debuted on Netflix in 2013. The documentary humanized a candidate that came across as scripted and out of touch: We see Romney playing with his grandchildren, and his family coping with his wife’s diagnosis of multiple sclerosis; we see him preparing for an upcoming debate with Obama, and how he grows frustrated with his campaign, saying disarmingly, “In which case, I think I’m a flawed candidate.”

The documentary received rave reviews and was seen by at least five million people. It’s too bad for Romney that it aired after his campaign and not during it.

A weekly “Cruz” or “Rubio” show would be ratings bonanza, supplying juicy content over which political commentators could opine. We would see Cruz’s reaction when he learned that failed GOP candidate Ben Carson would endorse Trump. Or we would see Rubio calling Jeb Bush for his endorsement. Trump might, for the first time, be drowned out by media attention.

Showtime‘s The Circus is an attempt at doing this, but it doesn’t go far enough, serving up less-than-newsworthy clips of campaign events. This should be a campaign-led initiative that shows the full humanity of the candidate, warts and all. Ultimately, campaign officials will see it as a trade off: more media exposure but a greater likelihood of veering off message. And few if any campaign advisers get paid for taking unmitigated risks.

But, when it comes to beating Trump, nothing thus far has worked. This just might.

It might be too late in the game to set up a Netflix series. But the candidates can opt for do-it-yourself media. That is, broadcast every moment of your life (besides sleeping, bathroom breaks, and intelligence briefings) over the Internet via Twitter‘s Periscope, Facebook‘s Facebook Live, or start-up Meerkat. These are live video-streaming services.

Cruz promises that he’ll stand up to special interests. Now he can show us: from refusing to meet with Wall Street lobbyists, to seeing him google his own donor records, to seeing which bankers have given him the most money. Rubio says that he will stand up for the middle class, so let’s see what his economic advisers tell him about his policies behind closed doors — that maybe the economic data isn’t so bad after all. Kasich is the positive candidate, so let’s see if he slips by insulting one of the others. Broadcasting their lives would set a high bar for transparency in politics. It would also humanize the candidates. And, most importantly, it would break through the Trump media blitz.

Trump has turned the presidential campaign into a television show. It’s time that the other candidates do the same. Voters might change the channel for once.