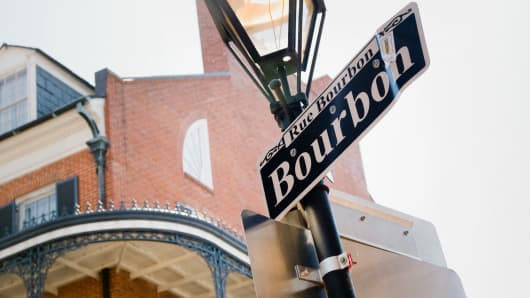 Ten years ago, I had a summer fling. Not with a lady but a city. In June 2005, I moved to New Orleans to research a book on jazz music. Like any romance, there was courtship: I was serenaded by brass bands on Frenchman Street and charmed by the “y’all, come back now” southern hospitality of its people. What started as enchantment became love for this quintessentially American city. So when the clouds began to gather, I didn’t think anything of it — especially as locals planned “Hurricane parties” with eponymous cocktails. But thankfully, with the drumbeat of warnings, I wised up and left town — though not everyone was as lucky.

On this, the tenth anniversary of Hurricane Katrina, let’s remember what the Federal Emergency Management Agency noted was “the single most catastrophic natural disaster in U.S. history.” All told, more than one million people were displaced and 1,833 people died, including my friend’s father. It was costly: insurance companies paid over $40 billion in claims, and FEMA allocated $131 billion to recovery efforts. I played a small role in these efforts, founding non-profit organization Music for Tomorrow with Jude Law (who I met in New Orleans) that helped musicians return to the city. It recently merged with the Afro Latin Jazz Alliance.

New Orleans has made great progress: Its population is at 79 percent of its pre-Katrina level; sales-tax revenue was up 29 percent in the first half of 2015 versus the same period in 2005; it has recovered all the jobs lost since the financial crisis; violent crime has fallen significantly since Katrina; and the number of bikeways and trails have increased from 10.7 miles to 81.1 miles since the storm. But there are still problems: The overall poverty rate was 19 percent in 2013 with child poverty at 41 percent; some 36 percent of renters pay more than 50 percent of their income for rent versus 24 percent in 2004; and income disparity between blacks and whites was 14 percent higher than the national average.

Here are three ways to invest in the Big Easy:

1) Angel investing. Entrepreneurship is booming: 471 start-ups for every 100,000 residents, which is 64 percent higher than the country’s average. Venture-capital investing has surged to $32 per capita last year versus $16 in 2010. “It’s not at the same level as Silicon Valley or Austin, but capital is flowing,” says Benjamin Karp, an angel investor and executive at a medical device company in New Orleans. “I’ve found many entrepreneurs with viable products. The talent and entrepreneurial spirit are here, but we need those outside New Orleans to invest here to establish the city as a more significant entrepreneurial hub.”

Founded in 2007, Receivables Exchange is a successful New Orleans-based start-up that operates a marketplace in which corporations and investors trade account receivables. The company partnered with the New York Stock Exchange and volumes surpassed $5.5 billion earlier this year. Another successful start-up, Naked Pizza was funded by Mark Cuban and makes healthy pizzas. It has 23 stores, including one in Dubai.

2) capital markets. Several Louisiana-based companies are publicly listed such as Entergy, an energy company and Tidewater, a supplier of offshore vessels. Graduate students at Tulane University in 2014 analyzed several public companies in the state including Pool Corporation, a provider of pool supplies, and IberiaBank Corp. Founded in 1887, it’s a bank with 186 branches in the region with $13.6 billion assets that used the recession to acquire failing banks. The blend between its legacy portfolio and new assets should contribute to meaningful growth in the future.

3) tourism. Not every investment generates a financial return. The time I spent in New Orleans yielded indelible memories. The tourism industry employs over 70,000 people. There were 9.28 million visitors in 2013 who spent $6.47 billion, up from the 3.7 million visitors in 2006. There are 300 more restaurants than before Katrina, and over $400 million has gone into refurbishing hotels.

While you’re there, you will “Laissez les bons temps rouler,” a local Cajun mantra for “Let the good times roll.” But as soon as you leave, you’ll be singing another tune, what Louis Armstrong once crooned, “Do you know what it means to miss New Orleans?”