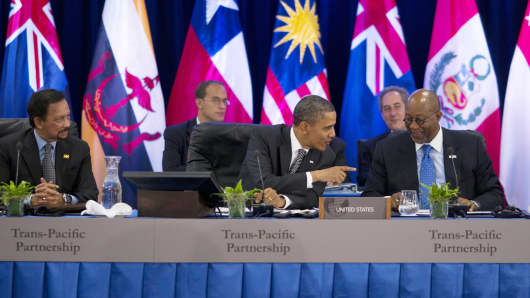 Multilateralism is back: The United States and 11 other countries reached an agreement on the Trans-Pacific Partnership (TPP). Despite its many advantages, however, in the coming weeks you will hear increasingly from the deal’s critics: Ford Motor Company already came out against TPP because there is not a currency-manipulation provision; Donald Trump has dismissed it as a “disaster”; and Bernie Sanders calls it “disastrous.”

But it’s important to remember these three reasons why the TPP would be beneficial in the long run:

1) Economics. The U.S. exported more than $622 billion in goods in 2013 — nearly $2 billion each day — to TPP member countries in 2013, according to the U.S. trade office. Because we live in a highly interconnected and competitive world, price discrepancies caused by tariffs can make U.S. products less affordable abroad. For instance, Vietnam slaps a 27-percent tariff on automotive parts manufactured in the United States. Malaysia adds a 40-percent tariff on U.S. poultry. The United States isn’t a stranger to protectionism, instituting tariffs on imported sugar. The TPP would lessen these tariffs, over the course of several years, creating a more level playing field among countries that are already trading copiously with each other.

President Obama is correct in his assessment, “When more than 95 percent of our potential customers live outside our borders, we can’t let countries like China write the rules of the global economy. We should write those rules.”

2) Geopolitics. The TPP is an economic means to achieve a geopolitical vision, to rebalance America’s priorities and increase its influence in Asia. For one, the agreement draws closer together two allies — the United States and Japan. Prime Minister Shinzo Abe has heralded the plan as central to his Abenomics growth plan, and the accord may even boost Japan’s GDP by more than 2 percent, according to the Peterson Institute for International Economics. In contrast, China is conspicuously absent from the agreement.

Even though China’s economy is suffering a slowdown, it still has deep economic ties with other Asian countries. For example, Japan is one of the largest foreign direct investors in China, and there was over $330 billion in trade between these two countries in 2012.

The TPP creates a sizeable counterweight to China’s economic influence in the region. There is hope that one day China may even join the TPP, wanting to access better trade terms with countries with which it is already trading. Moreover, the success of TPP may generate momentum to the U.S.-EU trade pact known as the Transatlantic Trade and Investment Partnership (TTIP) which has stalled.

3) Standards. The TPP comes with strict guidelines on environmental and labor standards, too. It addresses overfishing and illegal logging. It also seeks to limit the trafficking of endangered species. The TPP also provides a forum for citizens to point out how their own countries are falling short of their environmental commitments. TPP also requires that member countries institute minimum wages, allow workers to form unions, and adhere to the labor rights specified by the International Labor Organization.

Nonetheless, the TPP will face resistance in Congress, as some members will try to make political points for opposing what may be a cardinal achievement for President Obama. But if Congress rejects this deal, which originated during President George W. Bush’s administration, it won’t just be a blow to Obama but eleven of our allies and be harmful to American interests in the long run.