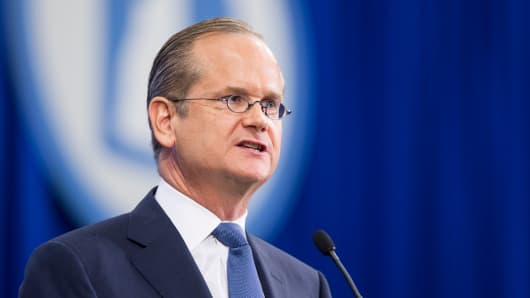 During the first Democratic debate, Americans were introduced to three “new” faces: Martin O’Malley, Lincoln Chafee, and Jim Webb. But there was one candidate absent from the stage – and I’m not talking about Vice President Joe Biden. The missing candidate was Larry Lessig.

Larry who? An acclaimed attorney and Harvard law professor who has written several bestselling books, Lessig entered the race for the democratic nomination in early September after raising over $1 million in campaign donations (Chafee raised only $29,000 in the first half of 2015).

Lessig is running to draw attention to the corrupting power of money in politics. Since last night’s debate was hosted in Las Vegas, near a casino owned by Sheldon Adelson, the billionaire backer of republican candidates in years past, it would have been a timely opportunity for Lessig to highlight his signature issue. But he wasn’t included.

I asked Lessig about the omission and his candidacy over the phone. “Historically, democratic debates have not excluded people,” he said, pointing to the participation of Rev. Al Sharpton and Carol Moseley-Braun in the debates for the democratic nomination in the 2004 presidential election. Even Larry Agran (another Larry who?), the former mayor of Irving, Calif., participated in the 1992 debates with then Gov. Bill Clinton. Bolstering Lessig’s case for inclusion is that his campaign has qualified for public financing, and he has a grassroots following, attracting over 10,000 donors who have given in small amounts.

The official reason for his exclusion from the debate is that he doesn’t pass the 1 percent polling threshold established by CNN. But Lessig’s name is rarely included in polling questions. “I don’t take it personally,” he told me. “Even though every contender except for Hillary Clinton has asked for more debates, the Democratic National Committee wants to shepherd voters towards a chosen direction.” Referring to himself as an outsider, he said he thinks that “The DNC doesn’t want me on the stage asking questions about the corrupting power of money in politics. They want to avoid it and my message.”

Last night, campaign-finance reform was mentioned and so, too, was taking on Wall Street. Lessig sees these issues as interrelated: “My charge against Sanders and O’Malley is that you are never going to take on Wall Street as long as it’s a huge financier of congressional candidates,” he said.

His campaign is laser-focused on campaign-finance reform. That is because there is an acute concentration in who is financing the candidates: some 158 families have accounted for almost half the money raised by presidential candidates, according to the New York Times. These families have each contributed more than $250,000. Much of this money is channeled into Super PACs that allow unlimited contributions. During his TED talk which has been viewed over 1.3 million times, Lessig said that congressmen spend between 30 percent and 70 percent of their time raising money from less than 1/20th of 1 percent of the population.

If elected, Lessig said he will enact the Citizen Equality Act of 2017 which would provide every voter a voucher so they could fund the campaigns of their choosing: He would introduce more money into the system but in smaller-dollar amounts. In addition, the act would establish voting as a national holiday so that more people could get to the polls. It would also limit the gerrymandering of voting districts, so congressmen could no longer choose their voters. The act would also limit the ability for government officials to become lobbyists. After his plan is passed, what he says would be the most historic and important democratic law in 50 years, Lessig promises to resign. He says this to dramatize his point: Money in politics is a defining issue and deserves our singular focus. Maybe at the next debate, he can make the point in person.