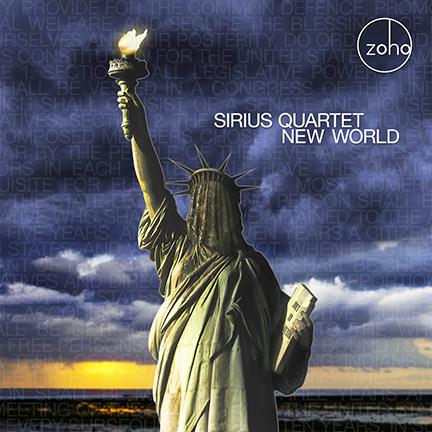 Beside the Point begins sweetly and quickly evolves with tart, scale-like passages. The continual lines are an example of persistence: “This piece is my declaration of struggle against discrimination,” says Hwei, the composer. He cut his finger in September 2017 and saw the crimson gushing from his 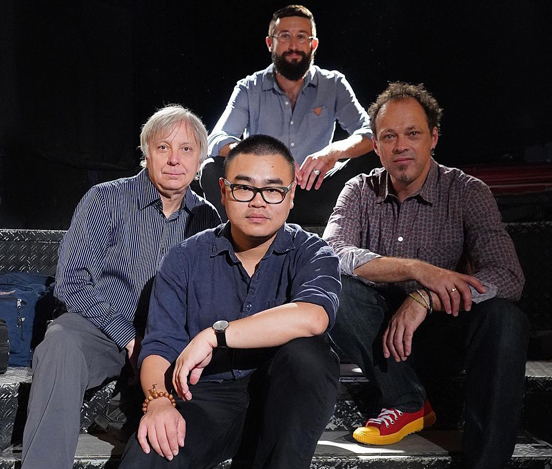 finger. He suddenly remembered that all humans bleed with the same color. And this is a necessary reminder considering the politics of division and race-baiting that have ascended to power.

Currents was composed by Jeremy Harman who originally arranged the piece for guitar, banjo, bass, drums, and cello. He wanted to retain the gritty and even menacing feel of the piece for this string quartet arrangement. As he says, it “makes urgent the sense that something more powerful than yourself is making itself known.” The currents of sound, from the pizzicato violin to sustained cello parts, interplay seamlessly, while dark elements seem to lurk throughout.

New World, Nov. 9, 2016 ominously refers to the shadow cast by the election of Donald Trump to the presidency. The piece contrasts the idyllic and hopeful themes found in Dvorak’s Largo from his Symphony No. 9 (“New World” Symphony) from 1893 with the fiercer passages found in the Shostakovich String Quartet #8 op 110 from 1960 that alludes to tensions between the composer and the Soviet Union. “With two immigrant violinists, we in the quartet feel that it’s important to create music that speaks to the moment in which we live and gives hope,” says composer Huebner. The piece was originally written for the “New World Initiative”, a composition competition by the New York Philharmonic, and it also received its Grand Prize in 2017. The success of this work inspired the quartet to create this entire album that deals with similar themes.
Huebner based #STILL on the song “Strange Fruit” that was composed by Abel Meeropol, and first recorded by Billie Holiday in 1939. We’re well into the twenty-first century, yet our society is still plagued by the scourge of institutionalized racism, stoked by politicians so that they can get elected. The interplay between the melodic lines represents the interaction between societal voices with a capstone of lament, manifested by a melancholic coda.
Eleanor Rigby is of course the famous John Lennon/Paul McCartney tune from their iconic 1966 “Revolver” LP. It’s arranged exquisitely by Huebner. The song’s lyric refrain “All the lonely people. Where do they all come from? All the lonely people. Where do they all belong?” fits with this album’s theme of migration and with the unsettled times in which we’re living. With a heavy groove, this arrangement pushes forward with propulsive energy. More Than We Are is an aspirational composition by Harman, written originally in the spring of 2015 after his son Silas was born. “I was reflecting on this new phase of life and urgent need for personal evolution. I needed to become a more focused version of myself for the sake of my son and family,” said Harman. This piece features the juxtaposition of incomplete melodic fragments that sound as if they’re going through transformation, invoking feelings of euphoria to quiet introspection.

To a New Day refers to May 9, 2018, the date in which Malaysians rushed home to vote for political change. This movement is known as “The Amazing Race.” “It was the first time that we stood together as a nation, despite racial and religious differences, to make such a grand statement,” said composer Fung Chern Hwei. A new prime minister was elected who had previously served in the role, and is heralded as a statesman by Malaysians from all walks of life. “I dedicate this piece to my beloved country, Malaysia, and I wish her a healthy recovery,” said Fung Chern Hwei.

30th Night, Worshipping Heaven and Earth is a re-purposed prayer. The music by Yii Kah Hoe and lyrics by Chong Keat Aun invoke the tradition in which Chinese people worship heaven and earth on Chinese New Year’s Eve. They typically pray for happiness and good fortune. But in this musical version, the lyrics call for a just, clean, and admirable government. The grist for this piece were the anti-government demonstrations in Malaysia in recent years. The melody comes from a Chinese folk song called “Peach Blossom Crossing the River”, originated in the Minnanese/Hokkien speaking part of Fujian Province in China, but the lyrics in this track are sung in the Chaoshan/Teochew dialect, which, to many traditionalists can be quite a taboo. By invoking this iconic folk song, the piece has a subversive effect, and given political resonance. “This piece is unapologetically Chinese-Malaysian,” says Fung Chern Hwei.

Knives Out is a song by Radiohead, the famous English rock band, from their fifth album “Amnesiac” from 2001. “I feel like the knives are out again,” said Huebner. Hence, why he was drawn to arrange the tune. That he culls music from other genres speak to his ability to look to wide ranges of influences for his musical inspiration. Cavatina, composed by Stanley Myers and arranged by Fung Chern Hwei comes from the 1978 film “The Deer Hunter.” The piece’s name means loyalty and righteousness. As the arranger puts it, “war has always been a game for those in power. How does one find one’s soul locked up in a dark corner?”
“New World” features music of many worlds. The four members of the Sirius Quartet come from different parts and cultures. Yet many of the same political and societal forces are bringing tumult and dislocation across the world. These incredible musicians are creating music that speaks passionatel to the times in which we live, and by so doing, are challenging the rest of us to imagine and ultimately manifest more harmony in the world. -Kabir Sehgal