Kasich Enraged at ‘Fantasy’ Tax Plans of Competitors at #GOPDebate 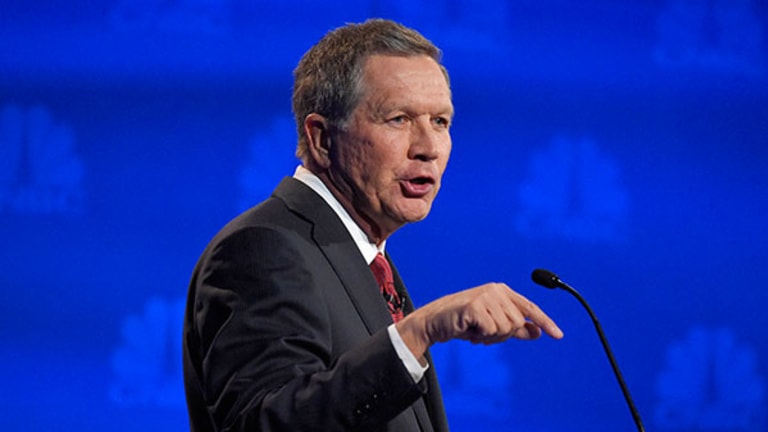 Ohio Governor John Kasich is standing up for his “realistic” tax plan and speaking out about the “fantasy” plans of his rivals.

During the GOP debate at the University of Colorado in Boulder, Ohio Governor John Kasich wasted no time criticizing the flat tax proposal of Ben Carson, who wants to adopt a tax plan based on the Biblical practice of tithing: Replace the national income tax with a national sales tax of about 15%. The problem with Carson’s proposal is that it doesn’t raise enough revenue to cover the federal budget, according to economists.

Kasich knows a thing or two about the federal budget. For six years, he served as the Chair of the House Budget Committee and was previously was the ranking member. He was instrumental in bringing about the Balanced Budget Act of 1997, the first time the federal government had a balanced budget in decades. He didn’t fail to remind viewers of either fact at the debate.

As the Ohio Governor, he inherited a budget deficit which has been turned into a surplus. He championed his experience during the debate: “I’m on the only president on this stage that actually was involved as the chief architect of balancing the federal budget. You can’t do it with empty promises. These plans will put us trillions and trillions of dollars in debt. I actually have a plan.”

He criticized the “fantasy” flat-tax plan of Carson — and by extension those who have also advocated for aspects of the flat tax: Mike Huckabee, Ted Cruz, and Rand Paul, among others.

“You don’t just make promises like this. Why don’t we just give a chicken in every pot while we are coming up with these fantasy tax schemes? We’re just cleaning up. Where are we going to clean it up?” he asked. The reference to “chicken in every pot” is often attributed to President Herbert Hoover, who presided over the beginning of the Great Depression, but it’s not clear whether actually made this remark.

Kasich further took his fellow republican rivals to task. “This stuff is fantasy. Just like getting rid of Medicare and Medicaid. Come on! You don’t scare senior citizens with that. It’s not responsible.” He was alluding to Carson who suggested that maybe Medicare should be abolished.