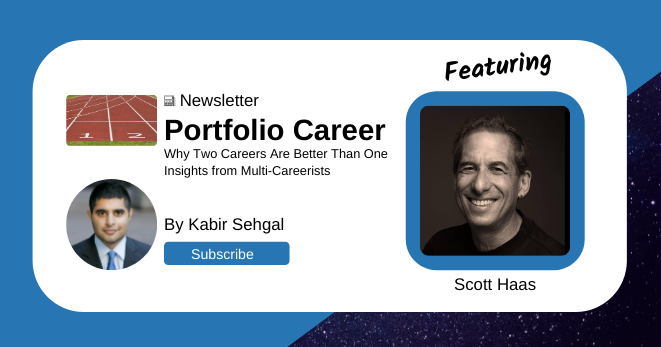 Meet Scott Haas. He is a prolific writer who has authored books on a wide range of topics such as immigration, happiness, and even food. That he writes about these disparate areas shows that Scott is intellectually curious. Where is mind goes, his pen quickly follows. He has a passion for music and writes a regular column for a Boston-based periodical. In addition, he’s a clinical psychologist who has worked closely with communities of color.

On his motivations to have many careers

“I’m a writer by temperament, and have always thought of myself as a writer. Psychology is similar: Observe and document with the bonus of getting me out of the house and trying to be of use to people. That use is focused on helping folks to develop and commit to their true narratives rather than those imposed upon them by families, systems, and institutions.

On how long he’s had multiple careers

“I have thought of myself as a writer since I was six years old, no exaggeration — I wrote comics that my friend Ronnie illustrated that we tried to sell in school. I became a clinical psychologist in 1983 after completing my doctoral degree at the University of Detroit and my internship in Boston at a Harvard Medical School hospital.”

“Choose careers that are inextricably linked — to find common features so that doing one adds to doing the other.”

“Psychology can be reductionist, pathology-driven, and conclusive; all aspects that stand in the way of being a decent writer. A writer has to be open to surprises, joy, and not knowing. So it is an ongoing, daily challenge to bring writing into psychology. It’s not seeking an outcome, per se: The creative tension is exhilarating and keeps me alert.”

How multiple careers are mutually beneficial

“Psychology has allowed me the profound privilege of learning the intimate, hidden, shameful histories of people; it’s a heavy thing to be granted that effort toward trust. To bear witness. Then, too, both psychology and good writing are all about pursuing truth.”

“I do not work all the time and am convinced that the most creative people I know or have read about spend inordinate periods doing nothing. I try to do nothing. My new book is about doing nothing. Naps, walking, cooking. In my new book, I quote Byung-Chul Han, a professor at the Berlin University of the Arts and author of The Burnout Society: “When every moment is translated into an opportunity to make yourself more productive or more effective, then there are no longer any pockets of unproductive time, outside of capitalist accumulation. This obsession with achievement and activeness is ‘generating excessive tiredness and exhaustion.’ Worse, it is a solitary tiredness. It has, Han continues, ‘a separating and isolating effect.'”

On dealing with the stigma of having multiple careers

“The stigma depends on the careers, and the cohorts you gather around you. The best thing is to try and ignore unasked for criticism and develop and maintain focus on your work; and, gather people around you who respect and value what you are trying to do. You do not need more than ten people who get what you’re doing. I think of Chris Rock’s joke: ‘The high school kids were upset because they only had five friends! I didn’t have five friends in high school! I don’t have five friends now.'”

“Pre-pandemic, I went to the gym 4-5 days a week; the gym is now permanently closed. I went to two offices in Roxbury; both closed indefinitely. I had center court, 6th row, Celtics Season tickets: No season, I gave up the seats. I went to hear jazz 2x a month: Both clubs closed. I would return to NYC for food and theater; haven’t been since 9/19. I would go to Japan 2-3x a year and Switzerland 3x a year for work and because I live in Switzerland part of the year; no travel since 3/20.”

I cook every meal, have since my wife and I got married. Rarely went to Boston restaurants. Rarely had people here or went to friends’ homes. I’ve had food delivered from NYC and California purveyors going back 20 years. Kids out on their own. At home I listen to about three hours of music nightly, chiefly jazz, old and new, and some hip-hop, and a little bit of the Stones or Dylan.

Where to find Scott