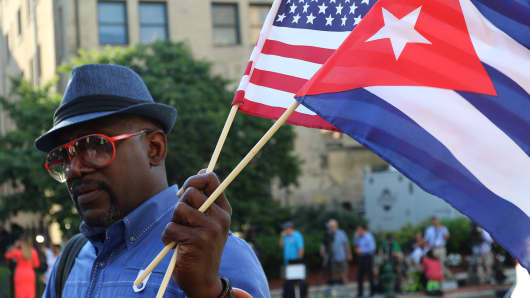 When President Obama declared his plan to normalize relations with Cuba on Dec, 17, 2014, I was in Havana with a Grammy-winning pianist recording an album appropriately named “Cuba: The Conversation Continues.” In order to finance the album, we raised capital from 21 “producers” who traveled with us. Among these producers were investment bankers, emerging market fund managers, corporate lawyers, and political risk experts. So when the news broke, I was able to consult with this on-the-ground think tank regarding what it meant for American businesses, as well as how to invest in Cuba. We came up with four investment ideas:

Art: Because we were also traveling with 24 musicians, we had great exposure to the Cuban arts community. We visited numerous famous galleries and met with scores of local painters, sculptors, musicians, and authors. We learned that many Cuban artists have sold their artwork for lots of money to tourists and also on the international marketplace. One artist told me that he sold a sculpture to a prominent U.S. hedge-fund manager (who visited Cuba) for over $200,000 – but the artist asked me not to disclose his name for fear that the Cuban government might ask for more in taxes. Another example, one of Cuban painter Wilfredo Lam’s works sold for $3 million at Art Basel in 2010. There’s a scarcity of Cuban artwork among American collectors, which might make for a compelling opportunity to “buy in Cuba, sell in America.”

Small businesses: We discovered that Havana is teeming with entrepreneurs who run private restaurants known as “paladares.” At one of these places, our server was also a medical doctor: He made four times more money waiting tables than he did practicing medicine! I wish I could have eaten at more paladares, but at the time, Americans couldn’t use their credit cards in Cuba. It was like Survivor Island, as I tried not to run out of bank notes. Thankfully, the U.S.-Cuba agreement allows for Americans to use credit cards in Cuba, which bodes well for paladares. Though these restaurants have low input costs, they are still in need of more food supplies (the Cuban government controls food distribution). U.S. companies are allowed to export food to Cuba – last year it amounted to $265 million. Over time, an opportunity might emerge to sell food directly to paladares.

Big business: Listed U.S. companies might one day provide exposure to the Cuban market. Large firms are already sizing up the Cuban market, located just ninety miles from the U.S. with a population of 11 million, the largest in the Caribbean. Netflix, American Express, and AirBNB are already operating in Cuba. While in Havana, I met a U.S. hotelier who assured me, “Cuba has three thousand miles of coastline, and we’re going to build it up.” However, for large firms like Exxon to get comfortable investing in Cuba, the embargo will need to be lifted, and there must be a resolution to the $7 billion in claims, assets like bottling plants and refineries Cuba seized during the revolution. Even so, U.S. companies will still need to gain approval for projects from Cuba’s socialist regime which exercises significant control over the economy.

Capital markets: One of the best ways to get exposure to the Cuban market is the Herzfeld Caribbean Basin Fund (CUBA). It’s a closed-end fund that’s composed of sixty companies that operate in the region, like Carnival Cruise Lines; Coca-Cola Femsa, which bottles and distributes beverages; and Copa Holdings, a Latin American airliner. Though CUBA is composed of companies in different sectors, they will all likely benefit, as the U.S. and Cuba normalize relations, and especially if the embargo is lifted. And even though it doesn’t provide direct exposure to Cuban companies, it usually moves in line with news about Cuba. So it’s no surprise that the stock is up 53 percent since Dec. 16, 2014, the day before Obama’s announcement.

As Cuba opens its embassy in Washington DC this week, it’s also putting out the welcome mat to American businesses and even traders – whether they like it or not.

Commentary by Kabir Sehgal, author of the New York Times best seller “Coined: The Rich Life of Money And How Its History Has Shaped Us.” He is a former vice president at JPMorgan and Grammy-winning producer. Follow him on Twitter @HiKabir.