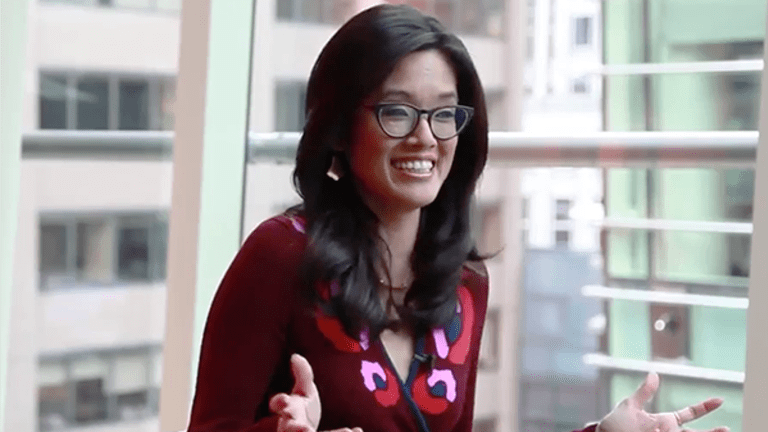 Bankers know where to turn for financial news: Betty Liu, the anchor of Bloomberg Markets.

Her nine-year tenure at Bloomberg has made her a familiar face on trading floors across the world.

Bespectacled and brainy, Liu doesn’t just report news but regularly converses with headliners such as investing guru Warren E. Buffett and Jamie Dimon, chief executive of JPMorgan Chase on her show. Her audience doesn’t just learn about investing but how to think of their careers as long-term investments.

Recognizing the opportunity to provide meaningful career advice to executives, Liu has become one herself by launching Radiate in March. Radiate curates career advice and leadership lessons culled from executives such as entrepreneurs such as Gary Vaynerchuk and business leaders such as Jack Welch.

“Radiate is a passion project,” she said in an interview.

After Liu published Work Smarts: What CEOs Say You Need To Know to Get Ahead in 2013, in which she interviewed business luminaries, many readers told her that they wanted to hear more stories about what it takes to get ahead. They want her to mine her vast Rolodex for gems of wisdom.

“It got me thinking that there must be more demand. So I launched Radiate,” Liu said.

One of Liu’s most well-received video interviews was with memory expert Jim Kwik who provided seven tips on how to remember people’s names after meeting them.

First tip: Be suave, and monitor the self-talk that happens in the brain. Those who tell themselves they can’t remember names won’t be able to.

Another tip: Ask people how to spell their name or where it is from.

Liu reportedly raised $1 million to expand her podcast which has garnered 200,000 listeners. For season 2, she interviewed a wide swath of business and thought leaders.

“We try to book those who have a very strong subject matter expertise,” she said.

Liu hired a team of four to help build the video business and also help start a contributor network, where experts publish written content on Radiate’s website. She wants to focus Radiate’s contributor content in thematic areas such as critical feedback, talent acquisition and time management.

“We know that in the business world, feedback is just something that it’s so hard to get right, especially critical feedback, so that’s an area that we really want to explore and start getting some answers to,” Liu said.

She wants readers to come away “feeling that they’ve gotten something out of it, a real return on investment for the time they spent in digesting our content,” adding that “our content has to be actionable.”

That is why Liu isn’t measuring Radiate’s success necessarily in terms of traffic but user engagement, and she wants to offer ways for her audience to engage more deeply with Radiate’s content and experts.

It is fair to say that she is also learning from Radiate’s “how-to” content. As a first-time entrepreneur, Liu is thinking critically about how to engage users and generate revenue to her platform.

Of course, content is a game of eyeballs, and Bloomberg may be wise to eventually distribute Radiate’s high-touch and salient leadership lessons to its large audience. Many Wall Street traders would welcome deeper, more instructive content on their Bloomberg terminals.

Although Radiate is welcome to sponsorship opportunities, Liu is steering in the direction of subscription revenue.

“We want to offer content plus service,” she said.

When a customer subscribes to Radiate, he or she may eventually get access to educational classes, live events, online workshops and a video library. In a sense, customers will be invited inside the velvet rope of Liu’s highly successful community of business leaders.

It is rare to see anchors become entrepreneurs, with the exception perhaps of Dylan Ratigan who left MSNBC to take up hydroponic farming. And of course, Jim Cramer who started TheStreet.

That Liu is trying to convert her success into a lasting product suggests that she has learned from the business leaders she has interviewed: Don’t just report the news, but create it.