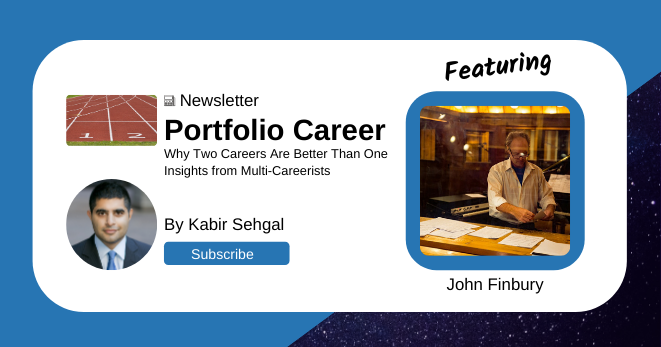 Meet John Finbury. He is a remarkable composer, arranger, and musical mind. He composed the music for Sorte! which was nominated for a Grammy Award. He was also nominated for a Latin Grammy for Song of the Year for his “Imaginário.” But when he is not writing music, you might find him writing legal opinions or briefs. I’m thoroughly impressed with how maestro Finbury is able to manage and thrive with multiple careers.

On his motivations for having dual careers

“Being a lawyer is my profession. It’s how I support myself and my family, and it’s how I support my music projects. That is not to say that I regard being a lawyer as an artistic compromise. It’s an essential part of my identity and my role in my community and for the most part I have enjoyed being a lawyer and have had a good run working with and helping good people. Being a musician and composer has been a lifelong pursuit. I can’t really call being a composer a ‘career’ to the extent that word is defined by finances. However, I have made 5 albums of music in the past 5 years. I have increasingly spent more time composing and producing my projects, so I am more focused on my creative life and all the business of producing and launching my records into the world. It is a joy to do it.”

On how long he’s had multiple careers

“I have been a practicing attorney for 34 years. I have been a musician for much longer than that. I began composing after college in 1978 and recorded a TV soundtrack of ‘bump and grind’ music for a Fred Simon WGBH TV documentary about Boston’s last strip club called Portraits From the Two O’Clock Lounge in 1980. I recorded an album of original pop and R&B music and pitched the songs in New York and LA to no avail. After a long hiatus from composing in 2005 when I was playing piano in a jazz ensemble, I got into the music of Jobim and the Brazilian masters. I loved this music and began composing Bossa Nova songs.”

Advice to those aspiring to have multiple careers

“Do it! One can be good at more than one thing. This pandemic has painfully revealed how vulnerable artists are if their only means of support are gigs. To be self-sufficient as an artist is to become your own patron of the arts. Multiple careers have made that possible for me. The sacrifice of course is the one we make with time.”

“Well, I just celebrated my 68th birthday so it can’t be said that any success that I have experienced in my music career has been ‘overnight.’ When I got the commission to compose the WGBH documentary soundtrack in 1979 I thought that perhaps that the composing path could be real. I was being paid to write and record. Very cool! I was inspired to write and record songs. I recorded an album’s worth of pop songs that I pitched. I was told one got close to Rod Stewart, but no. I stayed with my instrument, I stayed musical, but I pursued my other paths — a legal career, marriage, kids.

And then in 2016, when I was writing songs and making records again Fervor Records buys my catalog of the songs I wrote and recorded in 1980. All in the ripeness of time, I joke. But it’s no joke.”

On how his dual careers are mutually beneficial

“Certainly, my law career has enabled me to support my music projects financially. Also, it gave me the tools to tackle trying to understand the business, copyrights, publishing, setting up an LLC, royalties, contracts, etc. It also trained me to make decisions, develop perseverance and get used to work that is frankly hard. This cuts both ways of course, as developing one’s craft, ones composing chops, one’s lawyering chops, takes a lifetime of practice.”

“I don’t sleep a lot and never have. My kids are now young adults in college (though home in this pandemic!). Time is the main currency. In the past, music had some part of everyday mostly in the form of piano playing but lawyering and kids were my main focus. Since 2015, composing and recording have become increasingly dominant, and now in quarantine, I have a lot more time. I spend time with my wife Patty every day and we make a point of sitting down to a meal with the family almost every night. I spend part of every day on my health and fitness and try to maintain a sporting life. So far, so good.”

Something he wish he had known earlier

“I try not to dwell for long on the ‘path not taken,’ however I wonder where I would be, musically, if I had not abandoned composing music for two plus decades in 1983.”

“Generally, I don’t talk about it. Post-Grammy [nominations], I get some nice comments from a few people who have read the local press. But mostly I am quiet.”

A Day In the Life…

“We are in Quarantine time. Normally I would be putting on a suit and going to my law office. I haven’t seen a client in two and a half months and my practice is in suspended animation. I was planning on going ½ time this year but forced retirement has come early. I still go to the office for some part of the day, but we are all working from home and very part time. I do hearings on Zoom and am still working my case load.

I get up early (5:30AM), coffee, and then if I’m working on a song (and I usually am these days) I go to my piano (Nord Stage 3 with headphones so I don’t wake anyone) and get to work, going back and forth between the keyboard and the Sibelius program on my desktop where I create the scores. I’ll also practice and play piano during the day, and practice my new instrument, the electric bass. Even though I am not lawyering a lot it seems the days are full, and I rarely get through my to do list. I’ll walk and/or bike ride most days.”

Where to find John Finbury