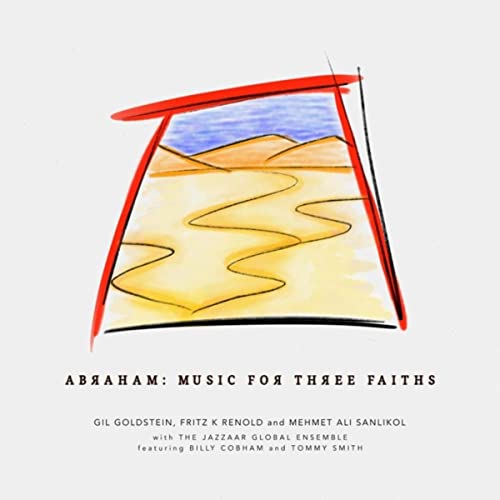 Renowned composer, arranger, accordionist/pianist, and multi-GRAMMY Award winner, Gil Goldstein professes that he didn’t grow up as a devout Jew. “Music was my religion,” he explained. Yet as a youth he took note of the sound of Hebrew language, with its particular rhythm and internal melodic code. He was influenced by Herman Berlinksi, the musical director of the temple which Goldstein attended. Goldstein provides his take on God’s call with “The Call (Abraham’s Shofar)” which is a beautiful and well-rendered musical meditation based on the Hebrew version of Psalm 105, which is the only one that mentions Abraham. Goldstein focused on the rhythm and implied melody of the text, in which God promises land to Abraham’s descendants. “Binding of Isaac” is based on Abraham’s decision to sacrifice his son Isaac, but God stops him. What’s more, in the Jewish faith, the binding indeed uplifts Abraham’s son to another level of existence, to a higher plane. Here Billy Cobahm is featured, who unleashes powerful vibrations, a musical reference to a higher place. “Covenant” is based on Abraham’s agreement with God, in which Abraham would inherit the vast lands of Israel. This is a colorful and enigmatic composition that begins with Norayr Gapoyan playing the duduk, a double-reed instrument found in the Middle East. Known for creating lush harmonies, Goldstein instead favored a strong melodic line that almost everyone performs together, representing the monotheism which Abraham professed. “I imagined a musical language that may have existed in the pre-Abrahamic world, without tonal gravity,” said Goldstein. “One which had a vanishing point,” as so much music (never recorded let alone transcribed) has been lost in the sands of time. In this piece, the most brilliant of voices emerges when Tommy Smith takes a relentless, restless, and resplendent tenor saxophone solo.

Master musician, composer, and educator, Fritz K Renold is the co-founder (with his wife Helen Savari) of the Jazzaar Festival, in Switzerland, now in its twenty-seventh year. The hundreds of artists who have participated in this program have created a diaspora of incredible musicians throughout the world. As the “father of the festival,” Renold embraced the paternal theme of this project. He also provides his take on God’s call upon Abraham with “The Call”. That the three composers wrote music inspired by the same episode in Abraham’s life was the “control group” of the repertoire, so audiences could enjoy how one idea could manifest into three different interpretations. In Renold’s rendition, we hear soaring melodies and polished harmonies. The piece has the added wings of Helen Savari’s lyrics, with spotless scansion. With a soft and slow Latin feel, “Lamb of God” is an elegant and graceful meditation on God’s providence of the sacrificial lamb (and alludes to the sacrifice of Jesus in the New Testament). “Promised Land” is inspired by God’s commitment to lead Abraham’s descendants of faith to a place of rest. With syncopation and sophistication, this piece showcases Renold’s proclivity as a composer to “play the band as an orchestra,” eliciting as many colors as he can from the many players.

Sanlıkol’s three-part suite is based on seminal moments in Abraham’s life. The first composition, “Fire” is inspired by an episode in which Abraham is placed in a fire after he denounced idol worship, yet he was saved by the mercy of God. Born and raised in Turkey, Sanlıkol is now a professor at the New England Conservatory. He drew upon his vast knowledge of Islamic art to craft his compositions. “Fire” has a repeated vocal ostinato, over which Sanlıkol performs the zurna with a repeating sixteen beat long cycle – a musical trait of the so-called Ottoman Janissary bands (ancestors of the European military bands and consequently the jazz band). The vamp creates an almost hypnotic effect until a new harmonic progression emerges towards the culmination of the song. His subsequent “Sacrifice” is about arguably the most well-known episode of Abraham’s life, when he almost killed his son, as a sacrifice to God. Muslims believe the son in question was Ishmael – not Isaac. Sanlıkol’s piece juxtaposes pronounced hits with brisk melodic lines, across several meter changes. Sanlıkol concludes with “The Call” in which, according to Islam, Abraham hears the word of the Lord and builds Kaaba with Ishmael. This unexpected but reflective conclusion

with a ballad helps Sanlıkol craft an emotional climax throughout his three-work opus.  It has been a distinct privilege to work alongside – and learn from — these three maestros and incredible guest artists. Producing this album with Fritz K Renold has not only been an eye-opening musical experience, it has also re-awakened my intrigue in spirituality and re-energized my interest in faith. And for any music to have inspired any listener to consider the divine and appreciate the commonalities among mankind is the work usually reserved for a higher power.